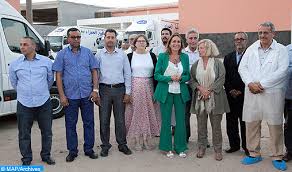 The European Parliament’s Committee on International Trade (INTA) drafted a resolution regarding the extension of tariff preferences to agricultural and fisheries products originating from Morocco’s Sahara provinces. The document emphasized the development efforts that are being made in the Moroccan southern provinces and the importance of the EU retaining the legal status quo in its trade deals.

The draft, which will be up for vote in the INTA later in December, clearly establishes that the current economic, social and environmental development in the region is considerable and so is the potential to create jobs locally for both low-skilled and high-skilled workers. The text stresses that more needs to be done to ensure better integration of all elements of the local economy. The youths of the provinces are taking economic and trade initiatives themselves and the draft proposal emphasizes the need for their continued engagement and expanded export opportunities to trigger greater investment in job-creating sectors.

The INTA also stressed the region’s strategic potential as an investment hub for the rest of the African continent. The committee also emphasized the bloc’s continued engagement with the region and its positive impact on the sustainable development. Based on the information collected on the ground, a large proportion of jobs created in the various industrial units located in the area goes to the locals in the provinces and the revenue from economic activities is also used locally. This attests to the validity of the prior information gathered and collated by the European Commission that the Moroccan Sahara populations directly benefit from the region’s natural wealth and resources.