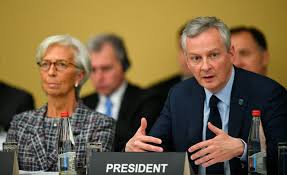 Europe seeks to become an arbitrator in the looming trade war between the United States and China. The trade dispute is getting worse, having a negative impact also on the EU market. The EU leadership spearheaded by France would like to see a WTO reform to salvage the situation. “Our ambition is to revitalize the World Trade Organization, which is indispensable,” the Minister of Economy and Finance, Bruno Le Maire, said when speaking at the conference organized by the French Ministry of Economy and Finance and the Ministry for Europe and Foreign Affairs on the future of multilateralism and reform of the WTO in Paris.

“We are facing increasingly serious difficulties. We run the risk of entering decades of downturns and low growth due to the global economic war waged by China and the United States. The new cold war is no longer a nuclear one but a trade one. And it has begun,” stated Mr. Le Maire. Since joining in 2011, China has been exploiting some of the WTO institutional shortcomings such as increasing state subsidies, lacking compliance with intellectual property rights and impeding access to government.

In this context, Mr Le Maire noted that the example of batteries demonstrates how China protects the sector by subsidizing. Thus, the EU is struggling to develop its own next-generation batteries as opportunities are limited. The US is dealing with similar situations by imposing tariffs – most recently on steel, wine and spirits, which risks fueling the trade war, the EU fears. “The EU doesn’t have to be the collateral trade victim of the war between the United States and China,” Mr. Le Maire concluded.