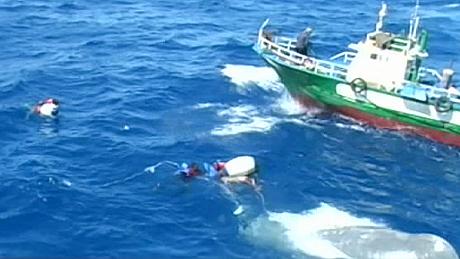 In a statement made following the tragic accident off the Italian island of Lampedusa where some 200 would be immigrants died, the European Commissioner for Home Affairs, Cecilia Malmström, pointed out that “Europe has to step up its effort to prevent these tragedies and show solidarity both with migrants and with countries that are experiencing increasing migratory flows.”
The accident occurred when an overcrowded makeshift boat carrying some 500 illegal immigrants, mostly Eritreans and Somalis, caught fire and sank. Some 155 survivors have been rescued, over 130 corpses have been recovered from the waters while searches are still going on.
“We have to become better at identifying and rescuing vessels at risk. We also need to intensify our efforts to fight criminal networks exploiting human despair so that they cannot continue to put people’s lives at risk in small, overcrowded and sea unworthy vessels,” the statement said.
The European Commission has developed a new tool, EUROSUR, which will become operational as of December this year, to improve the situation. EUROSUR will help Member States to better track, identify and rescue small vessels at sea thanks to better coordination between national authorities, appropriate channels of communication and improved surveillance technology, the Commissioner said expressing hope that all Member States would support the adoption and implementation of Eurosur quickly and its enforcement at national levels as soon as possible.
She also stressed the need to continue to address this phenomenon through cooperation and dialogue with countries of origin and transit and open new channels for legal migration.
The Commission has been engaging with several countries of North-Africa to agree on a concerted manner of better managing migration flows and promoting mobility, the Commission said recalling that the EU has recently agreed on a new Mobility Partnership with Morocco and hoping that similar agreements can be reached with other countries in the region, in particular Tunisia.
“While responding to these attempts to reach the EU, we should not forget that there are still many people in need of international protection,” the Commissioner pointed out before she called upon Member States to engage more in the resettlement of people in need of international protection.
Meanwhile, Italian political leaders asked for greater support from the European Union in dealing with migration and human trafficking following the shipwreck.
In a phone call with European Commission President José Manuel Barroso,
Interior Minister Angelino Alfano said Italy cannot continue to shoulder the increasing burden of major waves of migrants into Europe who land on the island.
This is not an Italian but a European drama, Alfano has reportedly said.
Italian President Giorgio Napolitano described such shipwrecks in “journeys of despair and death” as “massacres of innocents” and stressed the urgent need for the international community to fight human trafficking.
“It is essential to stop the criminal trafficking of human beings, in cooperation with the countries of origin,” the Italian President was quoted by the media as saying.
The High Commissioner for Refugees, António Guterres expressed shock at the tragedy but also dismay at “the rising global phenomenon of migrants and people fleeing conflict or persecution and perishing at sea”.
“The rapid rise in the number of migrants who die while fleeing troubles at home is a major concern for the United Nations,” he said in a statement. UNHCR is actively engaging with countries in the region to provide effective alternatives for people resorting to taking these dangerous journeys so they don’t have to risk their lives, he said.
This is the second boat disaster this week off Italy’s southern coast. On Monday, 13 men drowned when they attempted to reach the shore swimming.
According to recent reports, some 12,000 migrants landed in southern Italy, most often on Lampedusa, during the first seven months of the current year alone.
Scores of thousands of illegal immigrants from North and Sub-Saharan Africa, often including children, babies and pregnant women, try each year to reach the tiny island of Lampedusa despite the dangers of the journey. Because of the rocky shores of Lampedusa, boats do not find many safe places to land and Italian rescue teams often find it difficult to help all the passengers off their overcrowded boats. So, many die in such a hazardous journey.
Italy will observe on Friday a national day of mourning for the sunken asylum seekers while Pope Francis called, in a twit, on the faithful to pray for the victims.