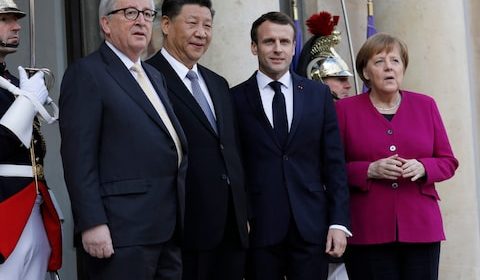 The leaders of the EU’s core economies and the European Commission are calling for more reciprocity in trade relations with China. Their position is a clear statement that the EU no longer considers China a developing country and is growing increasingly concerned about Beijing’s growing influence around the world. “From our main partners, we, of course, expect that they respect the unity of the European Union and its values,” French President Emmanuel Macron commented following a meeting with Chinese President Xi Jinping, German Chancellor Angela Merkel and EU Commission President Jean-Claude Juncker.

Chancellor Merkel commented that the new ‘Silk Road’ was very important to Europe but emphasized that the project ought to lead to more reciprocity. Commission President Juncker explained that reciprocity meant that “European companies must be able to find the same openness on the Chinese market as Chinese companies do on the European market,” adding that “investments should not only be Chinese”.

The meeting of the four leaders came just before an EU-China summit that is to take place in Brussels on 8 April after President Xi Jinping signed a battery of agreements with France including a major deal for buying Airbus aircraft. Over the weekend, in a controversial move, Italy signed a “non-binding deal” to participate in China’s new ‘Silk Road’ initiative with focus on transportation and trade. Rome commented that the value of Chinese investments could go up to 20 billion euros but for the moment it would be only limited to the ports of Trieste and Genoa. Italy became the EU’s first major economy to sign up for the controversial Chinese plan.