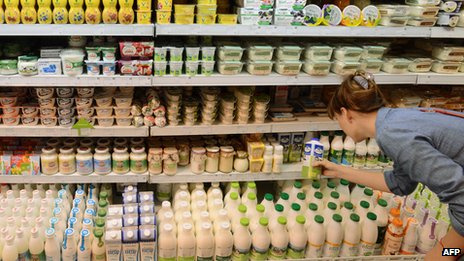 Russia has stopped imports of dairy products from neighboring Lithuania in the wake of the EU summit that will be discussing the future economic cooperation and trade ties to six former Soviet republics.
Moscow cited quality concerns over Lithuanian dairy products, yet concerns loom large that Russia is trying to prevent the EU from an ‘excessive’ involvement in ‘its’ backyard. The country is naturally interested in an exclusive position in terms of economic and political influence in the region, and is therefore very reluctant to see other players to step in. Lithuania, which is currently holding an EU presidency, exports 85 percent of its dairy production to Russia, and is also to hold the EU November Summit, has become an easy prey to demonstrate Russia’s geopolitical interests – commentators stay.
Russian consumer protection agency has precisely cited quality issues and violations of sanitary standards in cheeses and yoghurts. The agency’s chief added that Lithuania seems to be weakening its position in consumers’ rights and protection, which is why the agency is aiming to monitor also meat and fish imports.
In order to solve the situation before the Vilnius Summit takes place, the EU representatives are calling for discussion and cooperation from the Russian side. The EU Commission spokesperson, Frederic Vincent, stated that “the EU has the most stringent system in the world when it comes to food safety,” and the Commission had “complete confidence” in the quality of Lithuanian products.