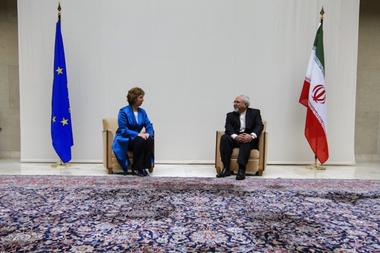 Iran made a “very useful” presentation at talks on the Islamic Republic’s disputed nuclear program in Geneva earlier this week, an EU spokesman said. Negotiators from six world powers, the European Union and Iran took part in a two-day meeting aimed at ending deadlock in an ongoing row over Tehran’s nuclear work.
As an EU source stated, “we heard a presentation this morning from Foreign Minister Zarif. It was very useful. Talks are reconvening this afternoon to look at further details.” However, no concrete details have been revealed so far if there have been any concessions offered by Teheran in a bid to win relief from sanctions imposed over concerns it is working to develop a nuclear weapons capability. Iranian leadership has consistently claimed that its atomic work is for peaceful purposes.
Iran put forward proposals regarding the stand-off over its nuclear program in talks with six world powers that took place in Geneva. According to the spokesman for EU foreign policy chief Catherine Ashton, Iranian officials presented the ideas in PowerPoint format, without further elaborating on the details of this presentation. He also hinted that there was a sense of “cautious optimism” ahead of the two-day negotiations that was also underscored by the fact that Ashton and Iranian Foreign Minister Mohammad Javad Zarif, who is acting as Tehran’s chief negotiator, dined together on Monday evening in a “very positive atmosphere”.
While Teheran has presented some unspecified proposals, the six powers were looking for concrete, constructive ideas from the Iranian side. At the same time, proposals that the powers – the United States, France, Germany, China, Britain and Russia – put forward earlier this year remained on the table in Geneva but they were prepared to “react” to Teheran’s new suggestions. The powers have called for Iran halt its higher-grade uranium enrichment, shut its underground Fordow enrichment plant and ship out some of its uranium stockpile. In return, the offer on the table comprises the relaxation of sanctions on gold, precious metals and petrochemicals trade, though Iran has considered these ‘incentives’ as insufficient.