Refugees Reaching the Coasts of a Fragmented Europe 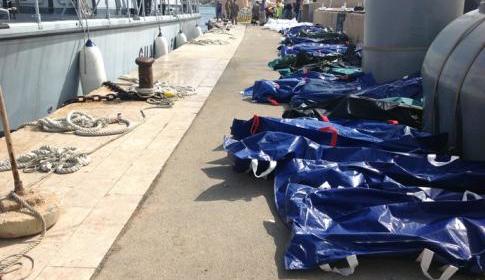 Low-scale tragedies where a few immigrants drown off the coasts of Europe have regrettably become unnoticed by most European citizens and governments. But when more than 300 people perished near the Italian island of Lampedusa, the alarms were set off again. The President of the European Commission stated that “we cannot accept that thousands of people die on Europe’s borders”, while Italian representatives reminded that “the Mediterranean represents the Africa-Europe border, not the Africa-Italy border” and that a “European drama” requires “European action”.
Yet, the tragedy also evoked how a crisis resulting from foreign policy and security challenges has only been interpreted through migration lenses and policies. Most people aboard the Lampedusa boats were asylum seekers from the most troubled countries in Africa. A large number came from Somalia and Eritrea, two of the top sources of refugees. But not fewer refugees have also recently escaped the most insecure landscapes of the Arab world, such as Syria and Libya.
While migratory flows to Europe often respond to the lack of opportunities for a better living in the countries of origin, refugees and asylum seekers add a mounting security challenge. Despite the need for comprehensive foreign policy tools, the European Union has so far only agreed to discuss the reinforcement of Frontex, the border coordination system supplying air and maritime surveillance. European Commissioner Cecilia Malmström has also called for a big save-rescue operation in the Mediterranean, a call seconded by the former Minister of Foreign Affairs of France, Bernard Kouchner, who also advocates for a “one country, one boat mission” with all 28 Member States participating in a common rescue plan.
Yet, chances are slim that EU Member States will come to reach consensus on a comprehensive way forward for migration and refugee crises. Many of them – particularly France, Austria, Greece or Italy – are failing to resist the pressures from populist and xenophobic parties, whose ideas have permeated the mainstream political discourses. In addition to a long-lasting harm to the fundamental values of European democracy, populism is denying a comprehensive political solution to such crises at the Union level. Moreover, asylum-seekers and refugees also reveal how crucial for Europe’s security conflicts in the Arab world are. The cornerstone of Libya’s fragile political system is its weak central government, which is proving unable to tackle lawlessness and restore authority and security in many parts of the country. In addition, serious deficits in border control are also reducing the capacity of the Libyan authorities to police its vast Mediterranean coastline.
The EU in its entirety is better placed than individual Member States to provide solutions to such foreign policy challenges. An adequate response to the Arab Spring, as reminded in the documents published by the European External Action Service and the European Commission since 2011, will only be for the long-run if it brings together economic, financial, political, diplomatic and security measures. The “mobility partnership” signed with Morocco, trading tight shore control by the Moroccan authorities with more visa facilitation and other measures for human mobility, is an example of a right move in this direction.
But in many other domains, the EU is still reacting in a fragmented fashion. Member States fail to open their internal markets to manufactured and agricultural products coming from the southern Mediterranean countries, thus hampering their development and job creation. Most of the major foreign policy issues, including the Libyan and Malian interventions, have been lead by individual Member States, often at the expense of a common European position. And the most important European capitals do not seem interested in discussing an EU strategic response for its Southern neighbourhood, not to mention a whole new European Security (or foreign policy) Strategy.
As long as the EU fails to adopt a comprehensive approach to the refugee crises – and differentiates them from the policies to halt illegal migration – efforts to stop more boats reaching the northern Mediterranean coasts will be futile. Multidisciplinary responses are needed to provide durable solutions to the stability of Europe’s southern neighbourhood. But, for that matter, more common strategic guidelines will be needed from European governments, something unlikely as of today.