End to the EU-Gazprom Anti-Trust Case? 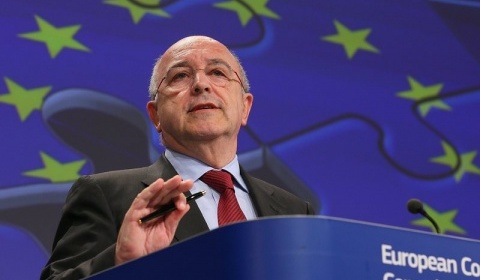 The European Commission announced yesterday that Russian Gazprom has made a first step towards settling an anti-trust probe which caused tensions between Brussels and Moscow. According to the EU Competition Commissioner, Joaquin Almunia, at a meeting with the company’s senior management, Gazprom expressed its readiness to discuss the possibility of a commitment-based solution to competition issues. Gazprom has reportedly pledged to draft proposals in the upcoming days, while these proposals in writing will be subject to the Commission’s approval.
Brussels formally opened the probe in September 2013 on concerns that the Russian gas giant may be hindering competition in Central and Eastern European gas markets. At that time, the Commission mainly referred to Gazprom’s role as a major supplier in Central and Eastern Europe, which yielded a dominant position for the company in the region. In addition to competition concerns, Gazprom may have manipulated gas flows, which curbed the possibility of diversification of supply. Gazprom has also linked gas prices to that of oil, which may have also “levied” unfair prices on EU customers. The company’s intimate connection to the Russian government moreover triggered outrage from President Putin directed at the EU.
Furthermore, due to Gazprom’s continuous struggle with Kiev, the company suspended gas supplies several times, which caused an upheaval in its relationship with the EU. On Wednesday, EU Commission also cleared Gazprom to overtake four German and Dutch oil firms. Gazprom is about to take control of Wintershall Services and WINZ of Holland, which are currently exploring oil and gas extraction possibilities in the North Sea. Wingas and WIEH, two German companies are also to be taken over by Russina Gazprom. According to Brussels, decisions were made after transactions had been finalized in order not to raise competition concerns.