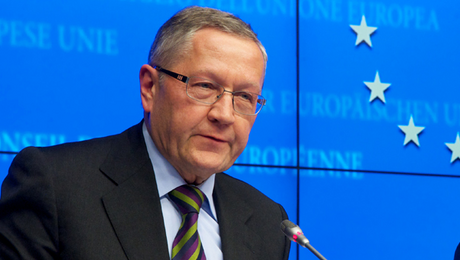 The EU ended bailing-out Spanish banks claiming that they are back on a common ground though unemployment still skyrockets in the country. The announcement about the end of the financial help was made by Klaus Regling, the Director of the Luxembourg-based European Stability Mechanism (ESM). Mr Regling also said the endeavour of many to get Spain out of bankruptcy was impressive and he forecasted that Spain was on the right track towards sustainable growth and stability. Moreover, he praised the EU austerity measures saying that the willingness of households and individuals to withstand temporary hardship for the sake of a healthy and long-term recovery was truly meaningful.
Spain is to officially exit its bail-out later in January after Ireland finished its aid program in December 2013, and Greece already announced it would finish its own soon too. Yet, unlike Greece, Italy, Portugal, and Cyprus, Spain’s bail-out struggle did not include a full-blown state rescue but the initiative was limited to its banking sector only. The ESM therefore provided the country with a 100-billion-euro credit line to help its banks. In the end, though, the ESM provided a new Spanish body – the Fondo de Restructuracion Ordenado Bancaria (FROM) – with more than 41 billion euro channelling loans to bankrupting lenders. Most of these loans are to mature in about ten years’ time.
The Spanish government announced that it would not seek any additional financial assistance after its rescue program ends. The country is also currently selling some of its re-nationalized banks that obtained financing from the ESM and FROM. Nonetheless, Brussels warned the Spanish government that the country is still not fit despite positive news as lending to private sector is still falling considerably. Most gravely, official figures still report the unemployment rate of more than 26 percent with almost 60 percent of those under 25 years old being jobless. Spain’s unemployment is the second worst in the EU28 after Greece (about 27 percent) and followed by Croatia (about 17 percent).