IMF and EU Back in Athens for Debt Negotiations 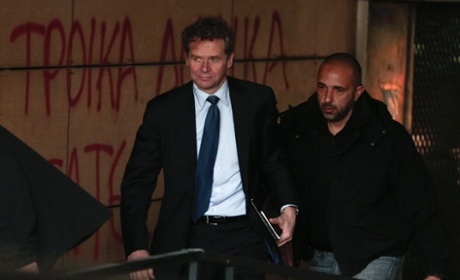 The European Union (EU) and the International Monetary Fund (IMF), Greece’s major creditors, renewed their negotiations with the country on its debt repayments. Both organizations have recently begun a new audit of Greek finances. The Greek finance ministry hopes that a deal will be ready in two-weeks’ time to aid the country to catch up with its debt repayment calendar.
According to the debt management agency, Greece has to repay 6.6 billion euros in treasury bills by April this year. The country’s state news agency ANA informed that there was 8.3 billion euros in eurozone loans and extra 3.6 billion euros from the IMF, which are all pending from 2013. The negotiations have commenced following the announcement of the Bank of Greece on restructuring requirements of the Greek four major creditors – Eurobank, Piraeus Bank, Alpha Bank, and National Bank. It is estimated by some preliminary analyses of independent private agencies, which are based on stress tests, that approximately 5 billion euros will be needed to help the banks make their ends meet. This includes not only soaring bad loans but also other ongoing challenges. Yet, the prestigious Financial Times reported the estimates of the IMF saying that up to 20 billion euros might in fact be required. The Bank of Greece did not want to comment stating that the results would be announced very soon.
The troika – the EU, the IMF, and the European Central Bank (ECB) – started bailing out Greece already in 2010 with a financial package worth 110 billion euros. When this program failed to save the economy, the trio of organizations agreed on another package of additional 130 billion euros plus a private sector debt write-off worth more than 100 billion euros. Nevertheless, Greece has been making a lot of effort to meet the terms of the second program and Athens now believes that a lot has been done to satisfy the troika saying that a primary budget surplus has finally been achieved. Athens says that the country has generated a budget surplus of 1.5 billion euros.