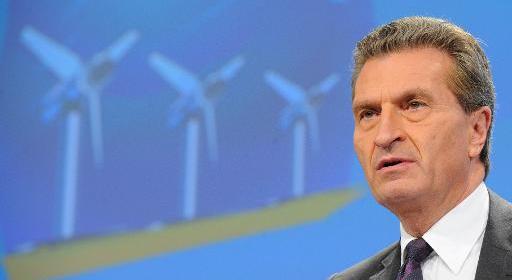 The European Union is to help Ukraine pay about 2 billion USD which Kiev owes to Russian company Gazprom. This will be a part of the overall aid package worth about one billion euros that the EU28 is to provide. It is expected that the package should be confirmed as early as on Wednesday (March 5) and EU Energy Commissioner Guenther Oettinger confirmed that the payment of Kiev’s outstanding debt for its gas bill was very high on Brussels’ agenda. Not only does the EU want to pay the debt of the Ukrainian firm Naftogaz but it might even supply the country with gas. More details on the contents and structure of the package should be known by today (March 5) – that is in advance of an emergency summit of EU leaders to be held on Thursday (March 6).
So far, the EU28 has provided Ukraine with about 610 billion euro in financial assistance and it seems that it could free up an extra amount of 500 million euros to help the country tackle with “cold-war-like circumstances”. Yet, the EU money accounts only for a little fraction of 25 billion euros that Ukraine’s interim government says it will need over the next two years. The International Monetary Fund (IMF) is expected to provide additional 15 billion euros by the end of 2014 while the United States promised 1 billion USD in loan guarantees as well.
On Monday (March 3) the EU Commission sent a working group to Kiev to gauge Ukraine’s financial needs and provide EU economists to work alongside IMF experts. Moreover, Slovakia might even reverse the flow of gas towards Ukraine, whereby the system that enables this was installed following the 2009 gas dispute between Moscow and Kiev. On Sunday (March 2), G7 finance ministers said they were ready to help the Ukrainian economy financially and technically so that the country may implement needed structural reforms required by the IMF.