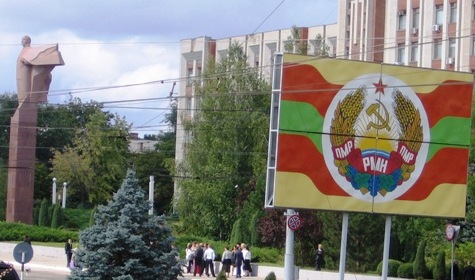 After the Ukrainian peninsula of Crimea had been de facto annexed by Russia following its referendum of March 16, the Russian-controlled stripe of Moldovan territory has asked for Russian annexation. Inspired by the Crimean case, Transnistrian authorities formally asked to join the Russian Federation on March 17, which triggered severe concerns over the stability of the region. Romanian President Traian Basescu warned that Moldova was in a great danger.
Transnistria separated from Moldova in 1991 after the Soviet Union had collapsed due to the fear that it could potentially become a part of Romania. After Moldova became independent, Transnistrians were worried that Moldova could eventually opt out to join Romania. The disputed region is now inhabited by a majority of Russian speakers.
According to the Romanian president, who is famous for his spicy remarks and comments about Moldova, Vladimir Putin is trying to rebuild the Soviet Union, which is why Moldova and Ukraine are priorities for him. He also pointed out political geography saying that the coast of the Black Sea is abundant in a chain of frozen conflicts that can be set off at any time.
Although the leadership of the European Union is too diplomatic to express their worries in the fashion of Ms Basescu, Brussels is concerned that Russia will increasingly bully countries in the region. Some anticipate that Putin will try to do something in Georgia and Moldova. Especially the latter seems to be very likely as Moscow started destabilising Moldova in 2009 when pro-European government took over from the pro-Moscow communists. Since then, Moscow has been repeatedly trying to impose economic hardship on the country, such as threatening to restrict Moldovan migration to Russia or ban Moldova’s wine exports.