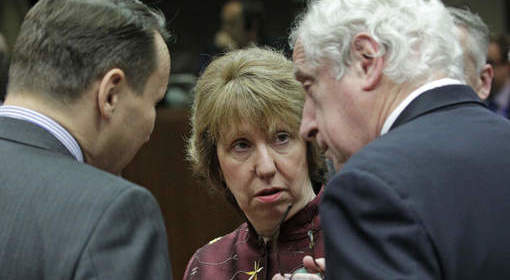 As the US backs Ukraine’s use of force in the country’s eastern regions, military chiefs across the EU have suggested that the Ukraine crisis should serve as a “wake-up call” for EU countries to increase their defense spending. After a meeting of EU defense ministers in Luxemburg yesterday (15 April), the Deputy Chief of the EU’s External Action Service (EEAS), Maciej Popowski, argued that “[Europe] had 70 years of peace now, but we see that power politics is back with a vengeance, so it’s a wake-up call and now we need to get serious about defense.” While stressing that “this was the feeling around the table” at the Luxembourg event, Mr Popowski also quoted EU foreign relations chief, Catherine Ashton, as telling the ministers that “if Ukraine is not a trigger to get serious about spending, about pooling and sharing, about smart defense, then what more do we need to get real?”
The EU discussion comes after Member States pledged during the EU Summit last December to co-operate more strongly on defense, but with few concrete results so far. To that end, attending the debate was also the NATO Secretary General, Anders Fogh Rasmussen, who told press: “We need to train and exercise more together, for instance the NATO Response Force and the EU battle groups, so that we stand ready for whatever the future may bring.” The high-level debate in Luxemburg came as Kiev launched what it calls “anti-terror” operations against heavily-armed pro-Russian separatists – some of whom are suspected to be Russian soldiers in disguise – in eastern Ukraine. Russian leader Vladimir Putin said the action means Ukraine “is on the brink of civil war”. Meanwhile, Popowski also underlined that neither EU countries nor NATO forces will help Ukraine if it clashes with the Russian army, though the US has put its naval vessels in the Black Sea on high alert.