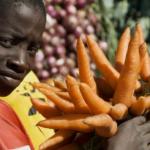 The European Union has agreed to provide 415 million euros to help African countries and region to boost integration on the continent. The money should be reimbursed by 2017 and a further financial injection of 430 million euro should follow before 2020. The cash will be used to financially support those projects which aim to support the governance of migration, mobility between the EU and Africa as well as academic exchange programs and election observation missions.
The first areas that are to obtain financial support from the EU are the environment, sustainable agriculture, migration, information technology, higher education, and research and innovation. President of the European Commission, Jose Manuel Barroso, said that the challenges that the world must tackle now cannot be dealt with by individual states because the contemporary challenges of our time transcend national borders. It was the trans-border character of the global problems that inspired Mr Barroso to come up with an idea of a Pan-African program designed to find solutions at both regional and continental level. Aiming the program at deepening the process of African integration, Mr Barroso also added that “The alliance between Africa and Europe is indispensable, today more than ever. This program will make it even stronger”.
Mr Barroso announced the launch of a Pan-African program at the 4th Africa-EU summit last April as Africa’s continental integration became among key priorities for EU mostly due to the increasing level of migration. The project is part of a larger whole-scale investment plan worth 28 billion euros trying to strengthen economic and trade ties between Europe and Africa. In February this year, the EU agreed on a 42-billion-euro free trade agreement with West Africa after ten years of talks. Finalizing FTAs with Southern African Development Community and East African Community has proven more complicated. Earlier in August, the United States announced its own 33-billion-euro investment deal for Africa, out of which 14 billion should come from U.S. firms. The remaining 19 billion dollars should be reimbursed through the initiative “Power Africa”.