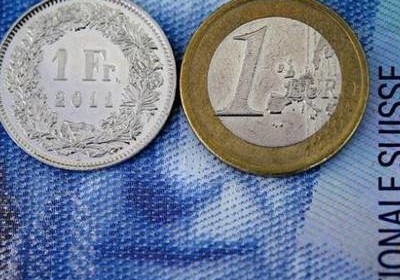 The Swiss franc has rapidly soared by almost 30 percent in value against the euro yesterday (15 January) after Switzerland had decided to unpeg its currency from that of the common currency area. The Swiss National Bank (SNB) made a decision to abandon its three-year old pegged exchange rate at 1.20 Swiss francs per the euro. In the first minutes after the SNB had announced this change, the franc broke past parity against the official currency of the euro zone at 0.8052 francs per euro. Later, it trimmed the gains to remain at 1.0350 francs. Moreover, the franc also gained against the U.S. dollar to trade at 0.8900 francs per dollar.

Swiss regulator’s decision to abandon a fixed exchange rate system, in which a currency’s value is fixed either against the value of another single currency, a basket of other currencies, or another measure of value, such as gold, was surprising but the SNB had been resisting immense pressures due to the cap. Investors seeking a safe haven from the euro zone’s financial and economic problems were among the main drivers behind the SNB’s announcement to unpeg the franc.

The last factor that contributed to the SNB’s decision was the highly probable prospect of the European Central Bank (ECB) launching its anticipated quantitative easing (QE). According to Jonathan Webb of London-based FX Strategy, the SNB is probably expecting the ECB to start money-printing next week, which would make it difficult for Bern to keep the franc fixed to the euro. “Thus, we expect euro/Swiss to trade around 0.90-1.00 francs after all the stop loss orders have been cleared,” he commented.