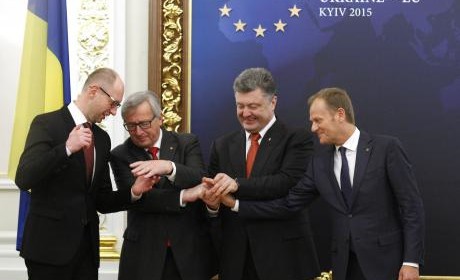 The European Union said that despite the on-going ceasefire violations in eastern Ukraine, it would not send armed forces to the country. European Council President Donald Tusk stressed that “we can only talk about a civilian mission, not military”, although Ukrainian President Petro Poroshenko earlier said that either the EU or the United Nationals ought to deploy a peacekeeping mission in eastern Ukraine. Instead, Mr Tusk promised that Brussels would send a civilian “assessment” mission to Kiev to look for ways how to boost security assistance for the country.

Mr Poroshenko thinks that a peacekeeping mission is needed to ensure that frontline areas and the rebel-controlled borders are properly monitored. Mr Tusk admitted that the EU “was concerned about reports of weapons still entering eastern Ukraine,” especially as international OSCE observers were “not able to verify a withdrawal of heavy weaponry”. Under the Minsk agreement signed in February 2015, both sides were supposed to withdraw heavy weapons from the conflict zone.

Mr Tusk therefore reminded that the EU would keep its sanctions against Moscow until the Minsk agreement is in place. However, there has been an on-going heavy fighting between government forces and rebels for a year in Ukraine’s Donetsk and Luhansk region with the West accusing the Kremlin of supplying arms to rebels. Moscow insists that it does not send in regular soldiers while asserting that any Russians fighting in Ukraine are volunteers.

On Monday 27 April,the leaders met in Kiev at the 17th EU-Ukraine summit, which was the first summit to have taken place within the Association Agreement framework. The implementation of the Association Agreement and the associated political and economic reforms in Ukraine were among other important topics discussed on the top of the possibility of the EU’s armed presence in the region.