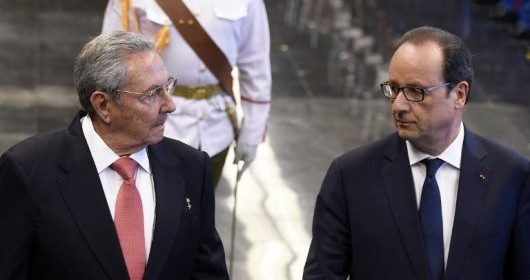 Francois Hollande has become the first French president to visit Cuba since 1898 and also the first Western European leader in Cuba since Spanish Prime Minister Felipe Gonzales visited the island in 1986. The French President also held private talks with the legendary revolutionary leader Fidel Castro, with President Raul Castro, Fidel’s brother, in the capital Havana. Five months after a detente between the Caribbean nation and the U.S., French leader used the one-day trip to the island to build business and diplomatic relations.

During his official visit, Francois Hollande also addressed the audience at University of Havana where he stressed that “to be in Cuba is to be in a country that in Latin America has represented dignity and independence”. However, the French President did not mention anything either about the more than decade-long freeze in ties between the European Union and the Caribbean nation Cuba or the human rights issues that led to that freeze in 2003. The EU froze political and cultural ties with Cuba’s government in response to the arrest of 77 dissidents in 2002.

Mr Hollande also called for an end to the decades-long U.S. trade embargo against Cuba because the embargo, in his view, badly damaged development of the island. After his hour-long meeting with Fidel Castro, the French President reportedly told the journalists that “I had in front of me a man who had made history.” Mr Hollande announced plans to double the number of scholarships to enable Cuban students to continue their studies in France, which is seen as part of the French government’s efforts to boost academic and scientific co-operation between the two nations. A number of high-ranking European and U.S. officials have visited Cuba since 17 December 2014, when the Washington and Havana announced they would move towards re-establishing diplomatic ties.