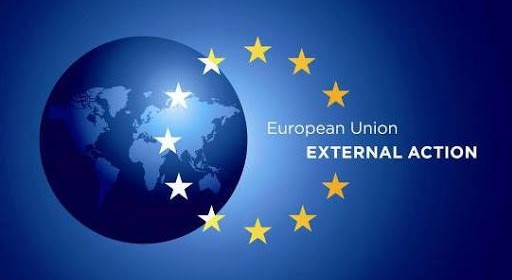 When it comes to European Union’s international standing, it has always had rather difficult starting conditions. It has been dealing with the dichotomy between intergovernmental and supranational approaches, which the EU tried to address and solve by the Lisbon Treaty, among others by establishing the European External Action Service (EEAS). This institution should have become a kind of the EU’s diplomatic arm, merging the Union’s expertise and the diplomatic experience of EU Member States into one body. But what role should the Union play in the international scene?
Europe’s security environment has been for a long time accustomed to the fact that the United States holds some kind of protective hand over it. This is an unprecedented luxury that the EU has become mentally addicted to. This specific situation is, however, beginning to change because both the EU and the U.S. often have diverging interests. While the EU’s neighborhood is falling apart, the United States is turning its attention to the Asia-Pacific. Moreover, EU’s and U.S. energy dependence stand in a stark contrast as well. The paths of these two former partners are starting to diverge.
It is currently obvious that the Union is intensively contemplating how to respond to the developments on the global stage. Different actors and stakeholders come up with different answers. Angela Merkel is, for example, trying to coordinate her diplomatic activities with the Council of the EU or the European Council, which was the case with the Minsk Agreements. On the other hand, President of the European Commission, Jean-Claude Juncker, has recently expressed the idea that the EU should have its own army, thereby pointing to the area in which the EU suffers from a chronic weakness.
The first point that the Union must strive to handle is managing the stabilization of its Southern and Eastern Neighborhood. It is also necessary that the Union will stop relying on the support of the United States and instead begins to be more active itself. Moreover, it is important to improve the way of communication between the EU and national institutions. Although the NATO should remain the main guarantor of the European security in the near future, strengthening the EU’s own military capabilities would mean strengthening the Europe’s negotiating position as well as the Union’s ability to act.