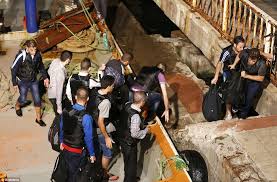 EU leaders are considering watering down their plans to relocate 120,000 refugees throughout the 27 Member States leaving Hungary out of the system. The plans moreover consider dropping binding quotas. The more relaxed approach was introduced just before another emergency meeting of the EU interior ministers held in Brussels. Last week, the ministers did not manage to agree on a European Commission plan for mandatory quotas for refugees from worn-torn countries. The plan collapsed mostly due to the opposition of the Czech Republic, Slovakia, Hungary and Romania.
A source from Luxembourg commented that debate whether the quotas would be mandatory or voluntary is artificial. The duchy, which is currently holding the EU’s rotating presidency, supports mandatory quotas although it admitted that the word “mandatory” would not be used in the draft document. The original plan projected the relocation of 54,000 asylum seekers from Hungary, 50,400 from Greece and 15,600 from Italy under the quota system. However, the Visegrad countries (the Czech and Slovak Republics, Poland and Hungary) – which the German press called “the merciless four” – oppose the scheme saying that refugees prefer to settle down in wealthier Western EU member states.
In a separate but related development, Hungary’s Viktor Orban said that by signing up for the plan, his country would be confirmed as a frontline state for asylum seekers. Given the Hungarian stance, Luxembourg confirmed that Budapest would not be part of the plan although it emphasized that “it will have to join the solidarity”. It is currently still unclear which countries will benefit from the plan to relocate 54,000 refugees that were initially earmarked in Hungary. Greece, Italy but also Croatia and Slovenia are being considered. Luxembourg,however,confirmed that the number of 120,000 will remain in the draft although the beneficiaries are uncertain.