Déjà vu: Eurozone’s Back in Deflation 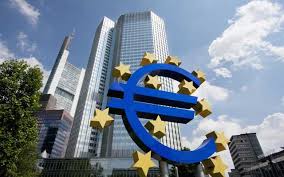 Yesterday’s data (30 September) unexpectedly revealed that Europe had fallen back to deflation in September suggesting that the fear of falling prices could be returning to the old continent. Last month, inflation rate was 0.1 below zero, which will likely add more pressure on the European Central Bank (ECB) to boost its massive stimulus program whose very goal is to shield the Eurozone economy from deflation.
The ECB launched a vast stimulus program worth more than one trillion euro that has now been running for about seven months, from March to September, aiming to get the inflation to the desired level of 2 percent and keep the economy on track. Howard Archer of IHS Global Insight commented that “it looks like being a long and arduous slog before Eurozone consumer price inflation gets up near the ECB’s target rate” adding that this target is very unlikely to happen before 2018.
Naturally, economists are concerned that deflation might become an entrenched phenomenon if consumers postpone their purchases hoping to buy products cheaper later. At the same time, companies put off investment, which creates a vicious cycle of declining demand and fewer jobs.The crux of the ECB’s plan to stimulate inflation aimed at keeping inflation growing in the Eurozone’s major economies – Germany and France. However, the rise has recently stopped in Germany at the rate of zero.
The ECB is, however, convinced that this development is only temporary and has been mainly caused by low energy prices. Jens Weidman, the head of Germany’s central bank, commented that “the slowing effects on inflation brought on by the fall in energy prices will be temporary.”Most analysts agree that the Frankfurt-based central bank should continue with its stimulus program to ward off further slip into negative territory. The Eurostat, EU’s statistics agency, in the meantime added that that Eurozone unemployment was still around at 11 percent.