Venezuela’s Russian ‘Specialists’: US, EU Demand Troops to ‘Get Out’ of the Country 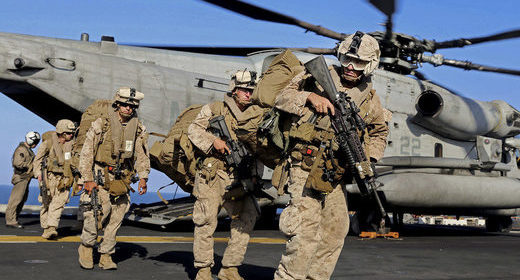 The European Union is concerned about the newly sent “specialists” that have been dispatched by Russia to Venezuela allegedly under a military cooperation deal. Moscow said that there was no threat to regional stability after US President Donald Trump had called on Russia to “get out” all military staff from the country. The American President said earlier this week that “all options” have been open to make Russia withdraw troops out of Venezuela after two Russia air force planes had landed close to the Venezuela capital over the weekend. “The situation in Venezuela is very polarized and tense. All actions and gestures that further escalate tensions will only create obstacles to a peaceful, democratic and Venezuelan-owned resolution to this crisis”, EU Commission spokesperson Carlos Martin Ruiz de Gordejuela said.

Russia has emerged as a staunch supporter of Venezuelan President Nicolas Maduro after he plunged his country into a political turmoil. In the meantime, the United States is supporting the opposition. Venezuela’s military attache in Moscow said that Moscow sent “servicemen” to Venezuela but emphasized that they would not take part in military operations. “The presence of Russian servicemen in Venezuela is linked to the discussion of cooperation in the military-technical sphere,” Jose Rafael Torrealba Perez was quoted as saying. Maria Zakharova, Russian foreign ministry spokesperson, referred to the “servicemen” as “Russian specialists”.

“Russia is not changing the balance of power in the region, Russia is not threatening anyone, unlike (officials) in Washington,” Ms. Zakharova said, adding that “Russian specialists have arrived in Venezuela in line with the provisions of a bilateral inter-government agreement on military-technical cooperation. No one canceled this document.” EU’s head of diplomacy Federica Mogherini is currently in Quito, Ecuador, for a second ministerial gathering of EU and Latin American leaders. The aim is to provide humanitarian assistance as well as helping create conditions for a peace process.