Will the Project of a Fixed Link through the Strait of Gibraltar Finally emerge ? 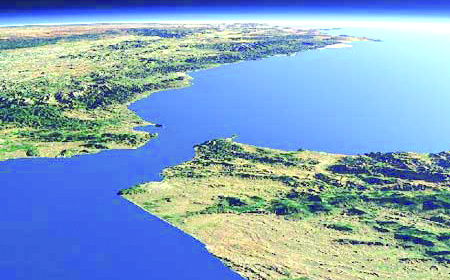 The project to establish a fixed link through the Strait of Gibraltar that dates back to 1980 when Morocco and Spain decided, within the framework of a bilateral cooperation agreement, to conduct joint studies on the feasibility of the project, is seemingly placed on the table again.

In the eighties and nineties, the project often made the headlines as experts from both sides were holding regular meetings to scrutinize the scheme, review the progress made in the project geological and geotechnical studies and discuss the project’s impact in matters of economy, transport, traffic and movement of people between the two shores of the Mediterranean.

However, as time went by and as some studies conclusions were rather pessimistic as to the feasibility of the project, enthusiasm faded away and for some observers, the project was shelved once and for all.

But this is not the case. Moroccan minister of equipment and transport, Abdelaziz Rabbah, said in a recent interview that the project is on the table again. He said his department has actually taken the matter in hand and appointed a new CEO of the Société Nationale d’Etudes du Détroit de Gibraltar (SNED). It also defined the broad lines of a work program to push the project further, he said, adding that the Strait of Gibraltar project is not linked solely to the fixed link, but is rather a large scale development project that requires a lot of study, effort and funding.

The project is not of paramount importance to Morocco and Spain only but highly interests the whole of Europe and several organizations of the United Nations system as well as a number of specialized governmental and non-governmental organizations.

Last month, the UN presented to the Economic and Social Council (ECOSOC) session in Geneva a report on the Gibraltar fixed link, underscoring that the establishment of a fixed link between the European and African continents will be a logistics platform of paramount importance and will certainly enhance the development potential at both the regional and global levels.

The report which includes a summary of activities undertaken from 2006 to 2013 and a summary description of the principal activities to be undertaken between 2013 and 2015 to advance the project points out that after several stages beginning in 1980, the study process has been focused, since 1996, on the basic option consisting of a rail tunnel driven beneath the sill of the strait, similar to the Channel Tunnel and comprising two unidirectional rail tubes connected to a central service and safety tunnel.

The functional design allows for the interconnection of the two countries’ railway networks and, in addition, the crossing of road vehicles on shuttle trains running between two terminal stations, one in Spain and the other in Morocco.

Owing to technical and economic considerations, and subject to the results of the studies on the development of relevant aspects of the basic option, the construction process in principle envisages the excavation of a 17-kilometre undersea exploratory gallery from the Moroccan side. This is needed to establish the exact nature of the geology in the area, determine the best construction method and refine the cost and timeline forecasts for tunnel construction. The boring will require the development of a detailed preliminary pilot project based on new geotechnical data that are yet to be collected, the UN report says.

As part of this huge project, whose cost is estimated at over $ 5 billion, the construction of the railway tunnel is expected to be carried out in three phases.

The railway tunnel could emerge in 2025.