Barroso Warns of EU Law Breach Due to Migration Cap 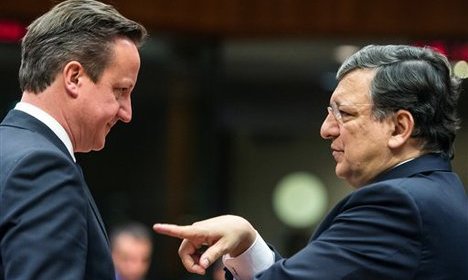 European Commission chief, Jose Manuel Barroso, warned Britain’s Prime Minister David Cameron that his idea of an arbitrary cap on free movement within the EU would not be compatible with acquis communautaire, EU law. Moreover, Commissioner Barosso said that Mr Cameron’s party was “lighting a fire” under the EU by pledging to hold an in/out referendum by 2017. “I think it is very important to have a positive tone between Britain and the EU,” he added.

Mr Barroso was speaking last week after the British media reported that Cameron was planning to cut EU migration by introducing a cap on the number of national insurance numbers issued to EU immigrants with low skills. Jose Manuel Barroso pointed out that Prime Minister Cameron invoked EU free movement laws after he had complained about Spanish restrictions on Gibraltar but emphasized that his ideas would be a breach of the European law. The EU Commission President said: “In principle, arbitrary caps seem to me in contradiction with EU laws. That is quite clear from my point of view.” Then, he also stressed that “I cannot comment on specific suggestions that have not yet been presented. What I can tell you is that any kind of arbitrary cap seems to be not in conformity with Europeans laws. For us it is very important – the principle of non-discrimination.”

President Barroso further reiterated that the freedom of movement remains to be a crucial principle in the internal market including movement of goods, capital, services, and of people as well. He added, to the discomfort of the British Prime Minister, that he remembered clearly when David Cameron called him to ask for the Commission’s tough resolution on keeping the freedom of movement between Gibraltar and Spain. Mr Barroso also reminded that the British citizens do have freedom of movement all over Europe and there are, for instance, 700,000 Britons living in Spain. “The principle of the freedom of movement is essential, we have to keep it,” he concluded. Yet, Mr Barroso, who is stepping down from his position of the Commission President next month after a decade, also stressed that he strongly encouraged new EU leadership to be open to some of the reforms proposed by the British government, such as addressing the abuse of benefits systems.