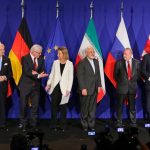 The European Union is seeking to counter the US President Donald Trump on his plan to tighten implementation of the 2015 Iranian nuclear agreement, hoping to convince him to stick to the deal. EU leaders are planning to present alternative solutions to their American counterparts in the coming weeks. However, President Trump has repeatedly criticized the deal and his administration has its own view on the agreement. EU policymakers, however, believe that if they proactively come up with solutions and B-plans, they will demonstrate their responsiveness to Mr. Trump’s concerns.

The options that Europeans are now considering include, for example, stepped-up inspection of Iranian activities or stricter interpretations of key provisions of the accord, whose aim is to prevent Tehran from getting a nuclear weapon. However, although Brussels is trying to show its flexibility, Washington and Brussels might collide over the future of the Iranian deal, some analysts fear. The test of what will happen to the deal will come in May when President Trump will have to decide whether to extend Barack Obama’s executive waivers that he had used to suspend some restrictive sanctions.

Meanwhile, Congress has started preparing new legislation that could expand sanctions over Iran’s activities in the region and charges of Iranian support for terrorism and of human rights abuses. Although the EU generally agrees that the nuclear deal does not preclude restrictive measures for other issues, they fear that Washington wants to impose economic pressure on Tehran. So far, the United Nations International Atomic Agency (IAEA), which oversees the Iranian nuclear deal on the ground, reported that Iran has been complying with the deal.