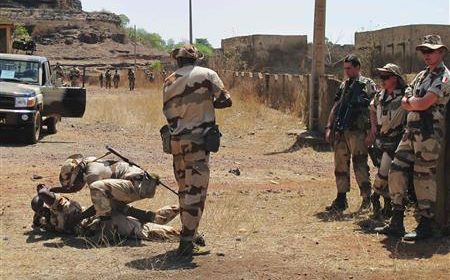 EUBULLETIN talked in an EXCLUSIVE INTERVIEW with Captain Jiri Stanek, a commander of the European Union Training Mission (EUTM) in Mali whose main objective is suppressing insurgents’ activities and delivering additional military equipment.

EUBulletin: You have recently spent six months in Mali where you served as a member of the EU military training mission. Can you give us a brief overview of the sources of the current instability in the country?

Captain Stanek: Mali is one of the world’s poorest states and it also has an ethnically very diverse population. It is these two factors that could be seen as the main sources of instability and insecurity in the country. From the economic point of view, there are significant differences between the northern and southern regions of the country. A large share of the public finances remains in the south where all the state power is centralized, while the country’s northern regions are allocated only a much smaller share of the state funds. The lack of funding coupled with unfavourable geographic conditions does not facilitate economic activity of the people, which in turn produces relative poverty and underdevelopment of the northern regions.

The second factor is the ethnic diversity of the population, which is comprised of more than 620 ethnic groups. In the post-colonial period, Mali’s north saw several violent uprisings that were stirred up by the Tuareg tribes and whose aim was to gain an autonomy for the northern part of the country called Azawad. The last uprising that occurred in 2012 has had implications for the security in Mali ever since. But the overall lack of security is also caused by the gradually increasing civil unrest and demonstrations all across the nation, as the disaffected population seeks to draw attention to the lack of transparency in the state power and the gradual decline of democracy.

EUBulletin: What is the Malian government’s attitude to the growing civil unrest and the demonstrations?

Captain Stanek: These demonstrations are held despite them being banned through the declaration of the state of emergency in the whole territory of Mali following the November 2015 terrorist attack at the Radisson Blu Hotel in Bamako, the capital city of Mali. The state of emergency was extended by the government several times and, at the moment, it is expected to last until at least mid 2017. The government uses the current state of emergency as a means to deal with the gradually deteriorating security environment all over the country, though I am not entirely convinced that this approach is effective as it only adds the fuel to the fire and thus it further aggravates the security situation and deepens the already widespread discontent with the state power among the population.

EUBulletin: A top UN official, Mahamat Saleh Annadif, argued last year that the dire security situation in Mali still can’t be called a ‘conflict’. Do you agree with him that Mali is going through a situation that is neither war, nor peace?

Captain Stanek: I fully agree with Mr. Annadif’s assessment. The conflict in Mali is mid-intensity and it is primarily confined to the country’s northern regions where government and international units carry out security operations aimed at increasing the security and consolidating the position of the state power. In contrast, in the south of the country, there have so far been only several terrorist attacks targeting mainly foreigners but the security in the capital city Bamako is generally comparable with any European metropolis. However, we must admit that also the southern regions of Mali have recently seen a gradual deterioration of the security situation and escalating violence.

EUBulletin: After months of negotiations, under Algiers’ auspices, a peace agreement was signed in May 2015 between the Government of Mali and the Platform Coalition of Armed Groups but the implementation of this agreement has so far proven rather difficult. Is this because the so-called Algiers agreement only seeks to manage the longstanding and primary conflict in northern Mali between the state and the minority populations over state power and political influence without also simultaneously addressing two parallel and mutually intertwined conflicts, namely an ideological one between different armed Islamist groups and local armed inter- and intra-communal conflicts between individual leaders and groupings of often ethnically based militias?

Captain Stanek: The compliance with the peace agreement signed in Algiers in May 2015 and then additional peace agreements signed on 21 June 2016 in Bamako among all the parties to the conflict is indeed a very complicated process. This is primarily because of the fragmentation among the leaderships from all groups involved in the conflict and also the diversity of their respective agendas and objectives. Some groups are primarily trying to gain political influence and power, some pursue largely religious goals, while others focus on purely economic objectives associated with the smuggling of weapons, drugs and people across the northern regions of the country. And there are also other groups whose agenda seeks autonomy for Mali’s northern regions and ultimately the declaration of an independent state there. In my view, it is very difficult to reconcile such a diversity of objectives pursued by different groups, which would lead to the full compliance and implementation of the peace agreement and the calming of the security situation.

EUBulletin: Looking at the current deteriorating security situation in Mali, is there a real danger that this could also lead to further destabilization of neighbouring countries, namely Mauretania, southern regions of Algeria or perhaps even Morocco?

Captain Stanek: At the moment, I don’t see a major risk of the Mali conflict spreading to the neighbouring or nearby countries, such as Mauretania or even Morocco. However, the situation on the frontier with Algeria is a different matter because this region saw several serious incidents in recent years and the Tuareg fighters have also used Algeria as a safe haven where they could hide and restore their fighting capabilities. Another country where I can see a relatively high risk of conflict spill-over is the neighbouring Niger Republic due to the activities of the terrorist organization Al-Qaida Organization in the Islamic Maghreb, or AQIM, that pursues its objectives in the Nigerian, Malian and Algerian territory.

EUBulletin: To that end, as cooperation between the UN and the African Union is crucial for peace and security in Africa, what are the areas of possible greater cooperation when it comes to solving the on-going security challenges in the Sahel and Mali in particular?

Captain Stanek: When it comes to role of the African Union and its cooperation with the United Nations in Mali and more general in Sahel, we need to take a long-term view here, ten, twenty years or more. This is because, first and foremost, it is necessary to stabilize the security environment through the deployment of the UN forces, which will in turn enable the development of the infrastructure and the gradual improvement of technologies in the agriculture and industry and by that to increase the standard of living for the majority of the population. This will ultimately lead to the satisfaction of their basic needs and thus to the decrease of the need to achieve them through violence.

EUBulletin: In what ways can the European Union assist Mali to overcome its current challenges: is it mainly in the area of national reconciliation, demobilization of armed groups and reintegrating them into the army or rather more in the area of democratization and socio-economic development?

Captain Stanek: At the moment, the EU seeks to help Mali in several areas. The first one is the military assistance that is represented by the EUTM mission, whose aim is to provide military training and advice to the Malian armed forces and thus increase their effectiveness in carrying out military operations in the north of the country. The second area is the EU’s assistance with the training of Mali’s police forces within the framework of EUCAP Sahel mission, which is ultimately designed to increase their efficiency in combating the threat of terrorism and organized crime.

Finally, the last area is the provision of the financial assistance through the European Development Fund whose main objective is to facilitate the political and economic development of Mali. In my view, all these three above mentioned areas are crucial to ensure the democratic functioning of the state and also to calm the security situation – having served in the EU military training mission in the country, I believe that the EU has taken the right approach in its continuous efforts to help Mali.