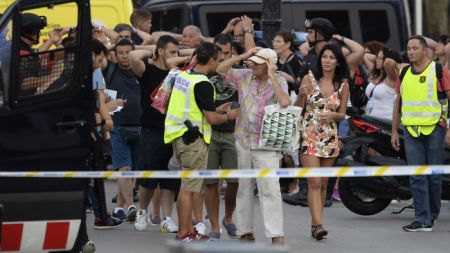 Spain was yesterday struck by the most violent attacks in its recent history when a jihadist attack in Barcelona left 13 people dead and more than 100 injured after a van had plowed into crowds in the city’s renowned Las Ramblas Avenue. More than 80 people had been taken to the hospitals, 15 were seriously hurt. The driver of the van fled on foot and is still at large.

Only a few hours later, six people were injured and five suspected terrorists killed by police in the Catalonian city of Cambrils, southwest of Barcelona. There was also an explosion at a house in the town of Alcanar that left one person dead. Police said that it appeared that the residents of the house had been “preparing an explosive device”. Authorities said that they are working under assumption that the events are related. The Barcelona attack has not been specifically claimed by ISIS but ISIS’ media wing, Amaq, commented that the perpetrators of the Barcelona attack were “soldiers of the Islamic State.

European Commission President Jean-Claude Juncker called the Barcelona attack “cowardly”, adding that “we will never be cowed by such barbarism.” German Chancellor Angela Merkel said the attack was “revolting” and her spokesman tweeted: “We are mourning the victims of this disgusting attack in Barcelona – in solidarity and friendship side by side with the Spanish.” Barcelona is the latest European city to have been effected by a vehicle attack after Nice was targeted during the celebrations of Bastille Day and Berlin during Christmas time. In London, Westminster and London Bridge, as well as Finsbury Park, saw vans used as weapons.