Reluctant About Enlargement: EU Agrees to Start Talks with Macedonia in 2019 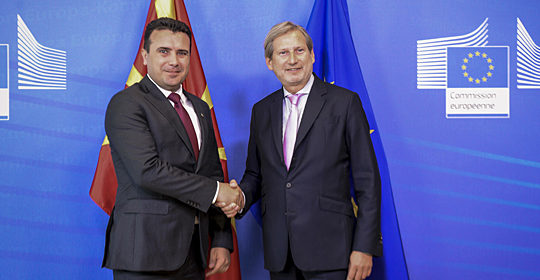 The European Union is now looking to set a target date to start EU membership talks with Macedonia in 2019 but warned that the country would have to actively work on domestic reforms for the talks to start in earnest. This move provides conditional support for Macedonian Prime Minister Zoran Zaev who has finalized an agreement with Greece on changing the name of his country, thus putting an end to a long-standing naming issue which had for long prevented Macedonia from the path towards ET and NATO membership.

The prospect of initiating talks could boost hopes of overcoming domestic opposition to changing the name in a referendum that is to take place after the summer, although some would like to see a swifter action. It could, however, take another 1.5 year for detailed negotiations to start. EU members also said that they are hopeful that Albania could also start talks next year. Albania is one of Europe’s poorest countries that only applied to join the EU in 2009.

The decision to open up talks with Macedonia was, however, characterized by the continued reluctance within Europe to further enlargement at the time when the organization is riven by internal disputes over numerous issues. While Macedonia and Albania were given an exception, France and the Netherlands made clear that they wouldn’t be supportive of quickly opening the accession talks.

French President Macron said that he does not think it is a good idea to take in any new members until the EU had solved the current serious internal divisions. “We acknowledge the progress made, especially in Macedonia,” Dutch Foreign Minister Stef Blok commented. “But these countries have to show the stamina and track record both in improving the rule of law and fighting organized crime.” Yet, the Macedonian Prime Minister Zoran Zaev sought to reassert the view that “the road of reforms and building our country as a state according to European rules is an irreversible process.”