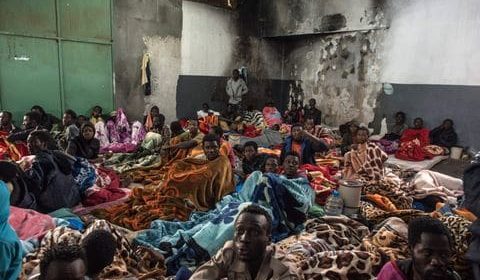 The European Commission says that Libya is not good enough at meeting international standards of migrant protection and unfit to host disembarking rescued migrants. The Commission says that a person’s life cannot be threatened and that housing, food, medical needs must be sufficient before the rescued migrants can arrive. “The Commission has consistently maintained that it does not believe these conditions are being currently met in Libya,” Commission spokeswoman Natasha Bertaud said, referring to an international agreement on maritime search and rescue.

The EU has provided training to more than 230 Libyan coast guard to rescue people from the Mediterranean and return them back to Libya, which was criticized by numerous stakeholders over the reports of slavery and the dire conditions in detention centres. In a broader picture, the Commission is trying to get coastal states around the Mediterranean to coordinate rescues in an attempt to prevent more migrants from crossing the sea. Earlier this month, the United Nations refugee agency and the International Organization for Migration convened a meeting to ponder various proposals to improve the search and rescue operations and disembarkation. Although the meeting was held behind closed doors, all coastal states around the Mediterranean were represented. “In general, there was consensus among participants on the need for strengthened cooperation and coordination and a willingness to continue discussions,” the Commission said.

On a separate note, the migrant rescue ship ‘Aquarius’ will not be waiting for orders from coastguards and will not return people to Libya, its search and rescue head Nick Romaniuk confirmed. “When we see there is a vessel in distress, with a high likelihood of people dying, we will go and rescue them immediately as per international maritime law,” Mr. Romaniuk said. Aquarius is a 77-metre vessel, operated by Franco-German charity SOS Mediterranee, and has set sail on its tenth mission of this year. The ship will be patrolling between 25-30 miles from the Libyan coast, just outside the Libyan territorial waters but inside search and rescue region.