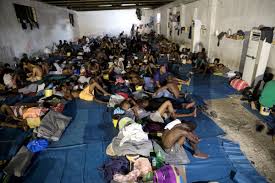 Ideas for the EU to set up asylum reception centers in third countries have been advanced, unsuccessfully, during the last 15 years. These have usually come from specific representatives of individual member states and have been put forward without careful consideration of their practical repercussions or their compatibility with obligations under EU law and policy or with regional and international standards in these domains.

Previous proposals have not found consensus among EU member state representatives or at any international and European fora. Until now, there has not been any formal EU initiative for extraterritorial asylum processing. Indeed, the above-mentioned past ideas have usually originated and been framed ‘outside’ the EU, with rather little understanding of their actual feasibility or implications for the EU legal system. They have tended to mean ‘less EU’ in domains where there is a very well-developed EU legal and policy regime and a human rights framework to which Member States have to abide.

It is important to stress that in the cases of Spain, Tunisia and the US, the examples of extraterritorial asylum processing and migration management seem to have been introduced as measures to prevent the arrival of asylum seekers and irregular migrants as a reaction to ‘crises’ – notably the Spanish Migrant Reception Centre in Nouadhibou, Mauritania, following the 2005–06 cayuco crisis, the Tunisian camps at the border with Libya following the migratory flows after the Tunisian and Libyan revolutions in 2011, and the in-country asylum processing centres in Haiti, Cuba and Central America following the increased flows of Haitian, Cubans and Central American minors. Australia stands in splendid isolation as
the paradigmatic case of formally and consistently implementing offshoring of asylum and pushbacks at sea as key features characterizing its entire asylum and migration management policy.

A key concern common to these four country experiences is the lack of clarity and publicly available information regarding the objectives of the measures, their implementation and their results. Their public policy objectives are not always clearly stipulated in publicly accessible and transparent legislation. While each country study presents its own specificities, concerning both the kinds of extraterritorial measures/practices implemented and the forms of cross-border irregular movement in each geographical area, none of them show irrefutable evidence of ‘effectiveness’ in reducing the number of irregular entries.

The Australian example demonstrates that any recorded changes in irregular flows to Australia have been in line with the global trends. The case of the US illustrates that the number of arrivals of young people from Central American countries remains high. As to the Spain’s example, while its incremental border-control responses in cooperation with African countries led to a decrease in the volume of arrivals via the West African route, this might have caused a diversion of human mobility to other African routes, with many people being ‘trapped’ in North African countries like Morocco and Libya. Thus, we need to question if these measures were effective in reducing a given route and mode of entry, or were their effects more generic in the sense of reducing potential irregular migration to the EU as a whole.

Another feature of these examples is that extraterritorial arrangements and instruments tend to be developed outside the reach of national and international institutions, notably supervisory bodies, and specifically courts, designed to provide venues to scrutinise the actions and responsibilities of states in light of international human rights standards
and commitments. In the Spanish case, the multi-layered approach to the containment of irregular flows has seen the signature of a number of bilateral agreements between Spain and African countries (including Morocco, Mauritania and Senegal), specifically in respect of the readmission/return of irregular migrants. Many authors have noted the secretive nature of these bilateral agreements, which undermines and escapes proper democratic accountability.

A critical consideration in refugee law is that refugees usually cannot apply for asylum abroad while they are still in their own State, as they are at risk of persecution and are normally fleeing from the authorities of their country. Arbitrary arrests and indefinite detention under inhuman and degrading conditions are common practices in these programmes. These practices represent a direct threat to human dignity, the right to leave one’s own country as well as the right to liberty and security. This is most patently demonstrated by the Australian case and confirmed by the decision of the Supreme Court of Justice of Papua New Guinea, which declared that the detention of asylum seekers in the RPC on Manus Island was unlawful.

Even in cases where extraterritorial processing takes the form of ‘reception centres’ that may not be ‘closed’ or where people have not stayed for long periods, such as the Migration Reception Centre in Nouadhibou (Spain–Mauritania), these centres have provided extraordinarily poor reception conditions for the inhabitants, without access to legal assistance or any independent judicial control. Initiatives such as the Choucha camp in Tunisia have demonstrated how extraterritorial asylum centres – despite not falling within the notion of ‘offshoring’ used in this report – pose significant obstacles, even to international organisations with long-standing expertise like the UNHCR, to duly deliver its
own refugee status determination procedures, in particular accessibility, the right of appeal and due process.

Thus, any idea related to extraterritorial asylum processing would fall within the areas where the EU has exercised legal competence or where the existing ‘internal’ EU standards and acquis travel abroad. Irrespective of the actual form that extraterritoriality might adopt, it would be subject to EU scrutiny and subject to EU legal benchmarks. Doing otherwise would mean reversing Europeanisation in these domains and would therefore be a direct violation of the member states’ commitments, to which they have ascribed themselves under the EU Treaties, chiefly the principle of sincere and loyal cooperation enshrined in the Treaties.

The combination of the three pillars of portable responsibility provide a multi-actor landscape of venues for seeking remedies with great potential for delivering portable justice. They have been designed to ensure that the EU’s norms, standards and fundamental rights are upheld by the EU, its agencies and EU member states, regardless of territoriality or degree of control. The current challenge is how to make them effective in practice and deliver justice and protection for those in need in light of international, regional and EU human rights commitments.

“Offshoring Asylum and Migration in Australia, Spain, Tunisia and the US: Lessons Learned and Feasibility for the EU” –

Study by a Team of Authors – Centre for European Policy Studies / CEPS.

The Study can be downloaded here