‘Taming’ the Economic Crisis: Europe Much Slower to Act Than the United States 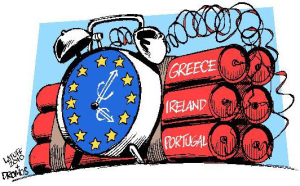 EUBULLETIN: The financial crisis of 2007–2009 is considered by many economists the worst financial crisis since the Great Depression of the 1930s. Now it looks like the U.S. economy is moving on the sustainable growth path while the European economy is still stuttering. Looking back at the distinct European and American policies over the last five years, would you consider the Quantitative Easing in the U.S. or the EU’s emphasis on fiscal discipline more effective in dealing with the crisis?

Prof. Svejnar: I think that so far the U.S. economy has done well, the government has been more resolute in trying to tackle the crisis both in terms of intervening in individual companies, government spending being very significant, and I would say that also the stress tests of banks in the United States were more thorough than stress tests of banks in Europe. This is why also the banks in the U.S. are more willing to lend and so the economy is growing, not growing as fast as one would have wanted to, but growing nevertheless already over two years. By contrast, in Europe, you really see, on average, stagnation – some northern countries slightly growing, like Germany and France, while southern countries are still declining. Europe really has not undertaken the same vigorous types of policies as European Central Bank (ECB) has been slower than the Federal Reserve Bank (Fed) to act. But now the ECB has actually acted when it has promised to act as a lender of last resort, which means that it will help countries in crisis and troubles, which is effectively a kind of Quantitative Easing type of policy as well. So in many respects, Europe is doing things similar to the U.S. but perhaps slower, with some more lag, and not as thoroughly in the case of the stress-test of its banks as in the United States.

EUBULLETIN: Some experts argue that the policy of Fed called Quantitative Easing effectively means that it is simply inflating the problem (the debt) away, while the ECT sticks to its strategy of fiscal discipline and low inflation which, of course, leads to a more protracted economic recession. Do you think then that the logical outcome of these two different approaches will be that in medium-term investors will trust more the euro (and euro-zone with its low inflation) because it tends to keep its value more than the U.S. dollar?

Prof. Svejnar: Well, that is a big question. I think that inflation so far has not been a problem. What the Fed and to some extent also the ECB are saying is that ‘when the economy starts growing and inflation will start being a possible problem, we are going to siphon off all the funds back, so we are going to undo what we did and so we will avoid inflation’. The big question is if they will manage to do it so precisely that they will really avoid it? Most people would probably say there may be some inflation rebounds – well if it is just a small jump, then it is only a small price to pay but if it is going to be more serious then, of course, it will be a big problem. And then there is also the problem of not doing it too early – the Japanese experience from the 1990s indicates that while aiming to employ the same type of policies like the U.S. today, when Bank of Japan (BOJ), the country’s central bank, saw the economy beginning to take off, they siphoned off funds and effectively exacerbated the protracted economic stagnation in the country also called the ‘Lost Decade’.

EUBULLETIN: Some Asian policymakers and scholars nowadays remind European and American leaders that when it comes to good economic governance, the roles have now reversed: they say that during the major Asian economic and financial crisis of 1997-1998, Asian countries were lectured (and even bullied) by Western powers, now themselves reeling from an economic turmoil, how they should best deal with the economic recession. They say effectively: ‘We will not do the same to you now but still the time may come now for the Western governments to learn a lesson from the Asian countries’. Do you personally think there are lessons that Europe and United States could learn from the way Asian governments dealt with the serious Asian economic crisis in the 1990s?

Prof. Svejnar: There is a big difference in the sense that the United States and the countries of the euro-zone are borrowing in their own respective currencies. So, when they get highly indebted, it is in U.S. dollars and euros. The big problem and liability for the Asian countries was that they were borrowing in other currencies, particularly in U.S. dollars, and then when their own currencies depreciated, this led to a very serious situation. Now India and even more China have accumulated significant foreign exchange reserves, so if they need to repay its debt, they can in a way repay it in Western currencies. That is the difference between now and the 1990s when they did not have sufficient reserves. So, I do not think the situation is not exactly the same because with a little bit of luck and if the investors do not overreact, these countries may have a minor swing but not a serious recessionary type of experience.

EUBULLETIN: Initially, there was the notion that the crisis that has affected Europe and the U.S. will somehow avoid the developing countries, and namely the BRIC countries. Do you share this view especially in light of the fact that India’s economy has slowed sharply over the last few months, Indonesian rupiah and Indian rupee have plunged, there is an economic slowdown in Turkey, Brazil and so on?

Prof. Svejnar: I think there is a problem, there is no question, especially with respect to the capital now moving out of the emerging markets back to the other advanced economies and particularly the United States because there is an expectation that the Fed will end its Quantitative Easing (QE) policy. So as the interest rates are rising, investors are searching for opportunities to invest in the U.S. Of course, these outflows of money from the emerging markets means that currencies are exposed to these outflows and, as a result, their values are declining and their economies are experiencing more inflation because imported goods cost more. So, there is an issue there – how serious it is going to be, nobody quite knows because this is a different situation from, say, the Asian financial crisis from the late 1990s. It is different in the sense that the exchange rates are now for the most floating and flexible, so there is an automatic adjustment because products from each country become more competitive in the world markets as their currencies depreciate. Also, many of these countries have accumulated significant reserves of foreign exchange so their central banks can intervene if they want to, and so it is really a big question as to how large these economic woes are going to be. Ultimately, it all depends on what will happen with the Quantitative Easing in the U.S. and especially the investor perception of what the Fed policy is going to be in the near future.