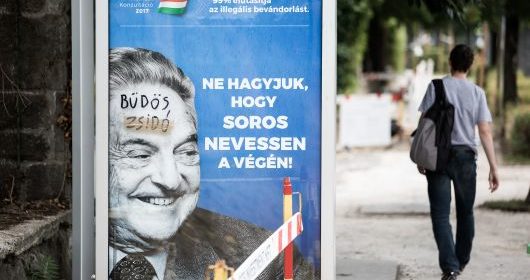 “The international aspect does not matter much to me. Hungarian Jews have the protection of our government. We also regularly conduct pro-Israel foreign policy,” Orbán said, adding that “because we are convinced that the existence of a Jewish state is important not only for European Jews, but we also believe that Israel’s security is a key issue for the stability of Europe as a whole. ” In regards to Hungary having anti-Semitic Christian law in the past, the Hungarian Prime Minister said: “That’s all over now.” Today’s anti-Semitism has taken on a new character: “Hatred against Jews and Israel in general is transferred to our society through migration,” he said, pointing out that anti-Semitism in Western Europe is rising, but declining in Central Europe.

Several reports have supported the Hungarian leader’s claims, including reports from Germany and France, which have revealed a significant increase in anti-Semitic incidents in the past year. Orbán has called the Hungarian native George Soros the “ugly face of globalization” and said that “on the one hand, we have Hungary, represented by its elected political leaders and on the other hand, we have international non-governmental organizations funded directly by Soros, that were not elected and want the world to switch to their view of the migration policy.”

Orbán and his party, Fidesz, are well aware of the negative reactions and the effort to pull out of the European People’s Party (EPP) in the European Parliament. Last month, members of Swedish Moderaterna called on Fidesza to step out of the group and this week the EPP has proceeded with the measures to expel the party. EPP’s President, Joseph Daul announced on Tuesday, that the group should decide this month whether or not Fidesz should stay. “Twelve EPP members from nine countries have called for the exclusion or suspension of Fidesz, discussing it on 20 March at a political gathering,” said Daul, adding that “only a political assembly can exclude or suspend a party, and I can not predict the decision of the political assembly.”