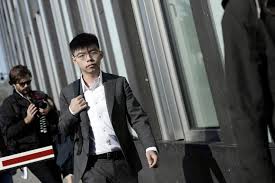 Beijing officials intensified their push back against pro-democracy movement in Hong Kong at a UN Human Rights Council meeting in Geneva on Wednesday (11 September), calling students “riot fighters” and referring to demonstrators as “radical protesters”, as activist Joshua Wong took the pro-democracy campaign to Germany. Meanwhile, the German Foreign Minister, Heiko Maas, has dismissed Chinese criticism over his meeting with Wong, pledging to continue meeting activists – “That won’t change in the future.” Maas’ comments come a day after the Chinese government summoned Germany’s ambassador to China over his meeting with Wong. Chinese officials said the meeting undermines relations between the two countries.

“When the chancellor is in Beijing, she meets with human rights lawyers and activists,” Maas told reporters, adding that “if I’m in Beijing, I’ll do the same. When I’m in Berlin, I do the same. And that won’t change in the future.” The German foreign minister’s words were echoed in German society at large, with calls growing across the country to use the names of ‘Hong’ and ‘Kong’ for the newly-born Berlin Zoo’s star panda cubs to send a message to China about its human rights record. Millions have taken to Hong Kong’s streets over the last almost 4 months in the biggest challenge to Beijing’s rule since the British handed the city over to China in 1997.

At the UN Human Rights Council meeting in Geneva, Hong Kong’s pro-China Federation of Women chief Pansy Ho Chiu-king sharply criticized the ongoing protests, claiming that “Hong Kong people have been plagued” with protests, many of which she said ended in “unprovoked violence and unlawful acts”. China has regularly accused “external forces” of being behind the unrest in Hong Kong, calling Wong’s meeting with the German foreign minister as “disrespectful”. Speaking earlier on Wednesday at a news conference in Berlin, Wong denied being a separatist, stressing he simply wanted free elections for the former British colony – a promise enshrined in the 1997 UK-China handover agreement.

The young Hong Kong activist also compared the struggle of Hong Kong’s protesters to the role of Berlin during the Cold War, seeing his city as a bulwark between the free world and the “dictatorship of China”. “If we are in a new Cold War, Hong Kong is the new Berlin,” he said in a reception space a stone’s throw from the Berlin Wall on the roof of the Reichstag building. China has repeatedly warned it would not tolerate any move towards independence for Hong Kong, threatening to crack down hard on any “separatist” groups.