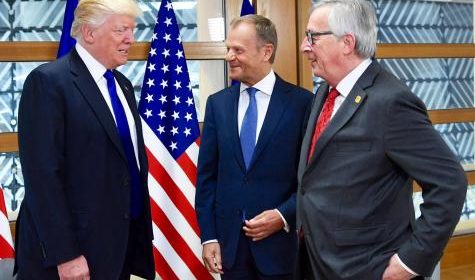 “I’m not 100% sure that we can say today, we, meaning Mr. President Trump and myself, that we have a common opinion about Russia. Although when it comes to the conflict in Ukraine it seems that we were on the same line,” Mr. Tusk commented following the meeting and added that “my main message to President Trump is that what gives our cooperation and friendship its deepest meaning are fundamental western values like freedom, human rights, respect for human dignity. The greatest task today is the consolidation of the whole free world around those values and not just interests.” Mr. Tusk concluded that the United States and the European Union should be jointly saying “values and principles first,” thus intentionally or unintentionally calling out President Trump’s presidential campaign motto “America first”.

European leaders did not have high expectations for their meeting with President Trump. Some called it a success that the meeting took place at all. Both sides have been in disagreement over a few policies in recent months, for example the US restrictions on visa-free travel for Polish, Romanian, Bulgarian, Croatian and Cyprian nationals. US Secretary for Homeland Security John Kelly argued that a visa-waiver program should be revised, saying that EU citizens who have travelled to Syria and Iraq and become radicalized pose a security threat to the United States.