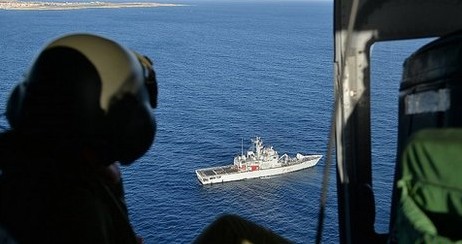 Italy is stepping up sea and air patrols following the deaths of hundreds of migrants sailing in overcrowded boats from North Africa. According the Italian Prime Minister, Enrico Letta, the “air and naval package” would start this week south of Sicily.
Last Friday, 11 October, at least 33 people died when their boat capsized between Malta and the Italian island of Lampedusa, while a week earlier, more than 350 migrants died in another shipwreck off Lampedusa. Italy has previously called for EU help in dealing with the thousands of desperate migrants – trying to escape war and poverty in Africa and the Middle East – who reach its coastline every year. Many are families fleeing war and poverty in Africa and the Middle East who hope for a better life in Europe. But the recent massive loss of life has led to further calls for EU action.
According to sources from the Italian government, it intends to triple Italian presence in the southern Mediterranean in part because of the fact fact that Libya is currently a ‘non-state’. Maltese Prime Minister Joseph Muscat visited Libya recently where he discussed the issue of migrant boats with his Libyan counterpart Ali Zeidan who asserted that “we are determined to deal with the problem.” He also added that “several measures have been taken in terms of equipment and the addition of maritime police to increase the monitoring of our shores.”
The migrant boat disaster off Lampedusa has highlighted Europe’s struggle to deal with boatloads of migrants heading across the Mediterranean from North Africa. Between 1 January and 30 September this year, 30,100 migrants reached Italy on boats from North Africa, the UN’s refugee agency UNHCR says. It does not come as a surprise that the biggest groups were from Syria (7,500 in total), Eritrea (7,500) and Somalia (3,000) because both Syria and Somalia have been ripped apart by war and in Eritrea thousands are either imprisoned on political grounds or face conscription into the army. However, many, if not most, of these migrants are not intent on staying in southern Europe but instead their goal is to travel north in the EU, for example to Scandinavia, the Netherlands or UK – here, they hope to find jobs and less hostility from anti-immigration groups.