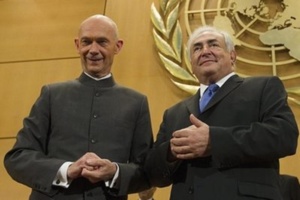 Jacques Delors, the now 88-year-old European Commission’s former President, has backed the former WTO Director General Pascal Lamy to succeed José Manuel Barroso as the head of the EU executive in 2014. Asked by the Belgian public broadcaster RTBF on the margins of a conference held by Le Nouvel Observateur and other media in Brussels last week, who would be the best person to lead the next European Commission, Jacques Delors said: “I might be accused of favoritism, but the best candidate would be Pascal Lamy.” The ex-president debated the future of the EU in a high-level debate between Van Rompuy, former French President Valéry Giscard d’Estaing and former Spanish Prime Minister Felipe González.
The European elections will be held in all EU countries on 22-25 May 2014. In line with the Lisbon Treaty, the European Parliament shall elect the Commission president based on a proposal made by the European Council, taking into account the European elections, whereby this principle will be applied for the first time in the 2014 elections. While Pascal Lamy is member of the socialist political family – the Party of European Socialists (PES) – it will be Martin Schulz who is almost certain to be nominated as its front-runner for the Commission post in the upcoming EU election campaign.
“Throughout his work, Pascal Lamy showed that markets need freedom, but regulation just as much. By the way, that’s exactly the German economic model: social market economy,” Delors said. Pascal Lamy – a top-level French economist and politician who served as Delors’ head of cabinet during his tenure as the Commission president from 1985 to 1994 and as EU commissioner for trade during Romano Prodi’s presidency before leading the World Trade Organization (WTO) for the past eight years – reportedly responded to the compliment, saying “there is a father-son bond between [Jacques Delors] and me”.
However, in a report published recently by the Centre for European Reform, analysts Heather Grabbe and Stefan Lehne argue that the proposal to put forward ‘faces’ for European elections to improve democratic legitimacy was ill-fated. In particular, they say that “national leaders must themselves get out in the campaign because they have the clout and credibility to make the case for the momentous decisions they took to save the euro. EU-level policies have become much more salient and citizens in every country have strong views on them now.”