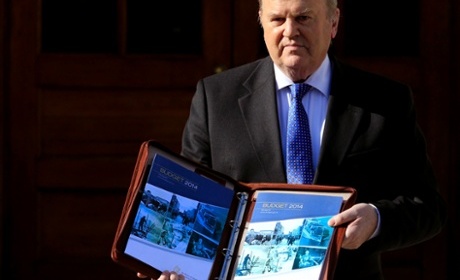 The Irish government has announced an extensive plan of austerity. The country is to increase taxes, cut spending to save 2.5 billion euro and many social welfare benefits have been reduced. Observers believe that the budget is going to be the last one of the bailout area.
The main opposition party, Fianna Fáil, accused the plan of being too harsh with the elderly as the government cut down on the funeral grant as well as on part of the medical system. The government is going to save about 113 million EUR just by intervening in the health system. Moreover, the sickness leave will also be restricted. One will have to stay six days out of work, instead of the current three days, to claim the benefit.
As to other social safety nets, maternity leave will be standardized for fresh mothers, and the new system will save almost 30 million EUR. However, the government introduced free GP care for children up to five years of age, which will on contrary cost about 35 million EUR. As far as the state pension, child benefits and carers’ allowances are concerned, there will be no changes whatsoever.
Irish Finance Minister, Michael Noonan, added that corporate tax will amount to 12.5% and reassured that his government is fully committed to the figure. The Irish rebirth in fiscal and budgetary policies comes after pressures from the European partners upon Ireland had asked for international bailout worth 85 billion USD in November 2010. Mr. Noonan described the rebirth as follows: “The story of insolvent Ireland is familiar to all our people and the sacrifices people have had to make in recent years are well known.”