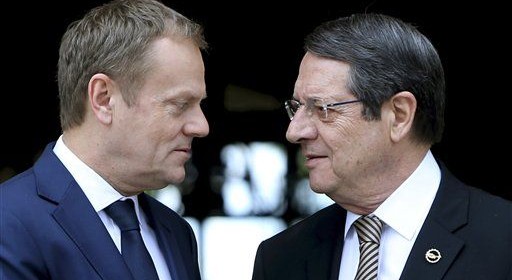 Cypriot President Nicos Anastasiades said on Tuesday (15 March) that his country would not support the migration deal between the European Union and Turkey unless Ankara makes some concessions in the dispute over the Mediterranean island. “Cyprus does not intend to consent to the opening of any new chapters if Turkey does not fulfil its obligations,” Mr Anastasiades commented after talks with EU President Donald Tusk, who admitted that “the key question of legality” is still outstanding and needs to be dealt with before the deal is finalized.

EU and Turkish leaders agreed last week to a tentative draft of the deal that would include a “one-for-one” swap of Syrian refugees and the return of the migrants who arrive in Greece and do not qualify as refugees under international law. Nicosia has expressed its concerns especially in light of the fact that Ankara hopes that the deal on migrants will lead to an opening of new chapters in the EU accession talks and a potential visa-free travel for Turkish nationals. Cyprus’ Anastasiades, however, made it clear that his country would not accept “the Turkish demands without (the) implementation of Turkey’s long-pending obligations” in its EU membership bid.

Cyprus has been divided since 1974 when Turkish troops invaded its northern part in response to a Greece-led coup attempt. The Republic of Cyprus has de jure sovereignty over the island and its surrounding waters according to international law but it is de facto in control of only about 59 % of the island’s territory. The rest is governed by the self-declared Turkish Republic of Northern Cyprus, which is recognized only by Turkey. In return, Turkey does not recognize the government of Cyprus. The conflict has led Nicosia to block six key chapters of Ankara’s talks on EU membership since 2009. If Nicosia blocks the EU-Turkey migrant deal, it will put an end to the EU’s largest diplomatic endeavour to ease the influx of hundreds of thousands migrants to the old continent.