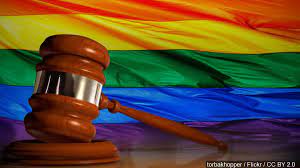 European Union affairs ministers quizzed their Hungarian and Polish counterparts on Tuesday (22 June) under the Article 7 sanctions procedure for the first time since the pandemic started. The Article 7 sanctions procedure – aimed to establish whether there is a “clear risk of a serous breach” to EU values by a member state – was launched against Warsaw in 2017 by the EU Commission, and triggered by the European Parliament in 2018 against Budapest. Meanwhile, fourteen EU countries on the same day called on the EU Commission to take action against Hungary over recently adopted legislation that bans the portrayal of LGBTIQ people to minors. Denmark, Estonia, Finland, France, Germany, Italy, Ireland, Lithuania, Spain, Sweden, and Latvia joined the initiative of the Benelux countries and issued a joint statement expressing “grave concern” about the amendments which “discriminate against LGBTIQ persons and violate the right to freedom of expression under the pretext of protecting children”.
But Hungary’s Prime Minister Viktor Orban strongly defended the new law in his country banning LGBTQ content in schools as he arrived at the EU summit in Brussels that was dominated by the growing controversy over the issue. “This is not against homosexuality, any sexual interference. It’s not about homosexuals,” said Orban. “It’s about the right of the kids and the parents,” he said, adding that he would not withdraw the legislation despite fierce public criticism of it by most of his EU counterparts. Leaders from 17 EU countries on Thursday (24 June) signed on to a letter that, although not directly mentioning Hungary, deplored “threats against fundamental rights, and in particular the principle of non-discrimination on grounds of sexual orientation”.
The issue was pushed to the forefront of EU politics this week when UEFA, Europe’s football governing body, rejected a plan by Munich to light up its stadium in rainbow colours for a Germany-Hungary match on Wednesday (23 June). An EU official said the burgeoning debate about Hungary’s law had become “quite important” and would likely be chewed over during a working dinner. Some EU leaders following Orban along the red carpet into the summit chamber were openly scathing about the legislation. “The Hungarian authorities are transgressing a fundamental value of the European Union in terms of the measures it is adopting,” Irish Prime Minister Micheal Martin said. “We will be articulating very strongly our view on that this evening.” Luxembourg’s Prime Minister Xavier Bettel said he would tell Orban “his comments and the laws he’s had adopted are unacceptable”.