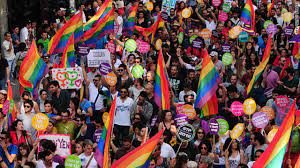 European leaders have denounced what they called Turkey’s baffling and concerning decision to pull out of the Istanbul Convention – an international accord designed to protect women from violence – and urged President Recep Tayyip Erdo?an to reconsider. Meanwhile, police fired tear gas at hundreds of protesters in Istanbul demonstrating against Turkey’s controversial exit on 1 July from the treaty. The peaceful protest became tense after police did not allow them to walk to the popular Taksim Square in downtown Istanbul. There were more demonstrations across Turkey including the capital Ankara, which ended peacefully. The Turkish leader sparked international outrage in March by pulling out of what is the world’s first binding treaty to prevent and combat violence against women.
MEPs and rights groups have denounced Turkey’s decision to quit the groundbreaking Istanbul Convention, calling it “a dark day for women.” They have roundly condemned the move, calling it a massive setback in women’s rights in Turkey, which has seen a spike in femicides and gender-based violence against the backdrop of the COVID-19 pandemic. German Renew Europe deputy Nicola Beer called the move “an absolutely unacceptable step, with devastating consequences for Turkish women and girls, that [Turkish President] Erdo?an is taking in front of everyone today.” In April, German Chancellor Angela Merkel used a speech to the Strasbourg-based Council of Europe (CoE) to pile pressure on Recep Erdo?an to reconsider his decision. “It is a matter of deep regret for me that Turkey has decided to withdraw from this Convention,” Merkel said in her CoE speech, joining other world leaders and MEPs who lambasted the decree.
The pact, signed by 45 countries and the European Union on 11 May 2011, requires governments to adopt legislation linked to the prosecution of crimes including marital rape and female genital mutilation. But it should be noted that not all EU members have ratified the Istanbul Convention and some said they never will. According to the Council of Europe website, Bulgaria, the Czech Republic, Hungary, Latvia, Lithuania and Slovakia have not ratified the convention. The Bulgarian Constitutional Court ruled in 2018 that the Istanbul Convention was unconstitutional. Poland has ratified the Convention, but the conservative government has second thoughts. Critics say the Istanbul Convention is a plot to introduce “gender ideology” in traditionally conservative societies.