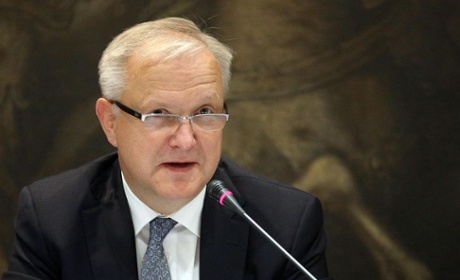 Olli Rehn, EU economic affairs commissioner, said that the troika – the EU Commission, the European Central Bank (ECB), and the International Monetary Fund (IMF) – should not be blamed for the way the bail-out system worked out in the end saying that the institutions did what they could. The commissioner said that the troika had to make decisions under very difficult circumstances and time pressure when Athens were going to default on the Greek debt and Portugal and Ireland were also about to ask for bail-out.
Mr Rehn was “grilled” for two hours on Monday, 13 January, in Strasbourg when several MEPs blamed the troika for a lack of transparency in its work. The questions full of reproach came after the visit of two euro-deputies in Portugal and Cyprus last week. The deputies reported that the three institutions allegedly bullied national governments into implementing austerity measures. Oli Rehn strictly opposed this claim saying that conditionalities of financial aid are not forced by anyone but agreed with the recipient country, which is in turn accountable to its parliament.
Commissioner also indirectly acknowledged that some countries – likely Germany – did partially design the eurozone’s financial rescue. He said that Brussels had been in favour of solidarity among EU member states from the very beginning but some members rejected this notion and preferred bilateral loans to Greece instead.
Mr Rehn moreover blamed EU members for dismissing a proposal by the EU Commission nine years ago to provide the Eurostat – the club’s main statistical office – with auditing powers. He hinted that that decision could have helped to prevent Greece from claiming false numbers on its deficit. This ultimately resulted in the troika receiving wrong economic forecasts repeatedly, which in turn led to a deep crisis due to data mismanagement.