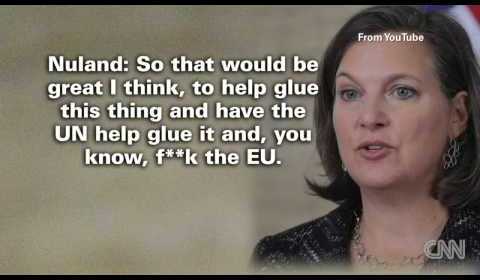 “Fuck the EU”, says an American voice on an audio recording posted anonymously on the internet on Wednesday (5 February) and it appears that it belonged to Victoria Nuland, the US assistant secretary of state – well, at least the US government has not denied that. Shortly afterwards, another recording has emerged, this time featuring voices of EU diplomats: “It really bothers us that the Americans are going around naming and shaming us,” says one of them and another responded by saying: “We are not in a race who is the toughest. We have other instruments.” Assuming that these tapes were not fabricated to tarnish the US and EU’s standing and put a wedge between the two but they are both authentic, what do they tell us about Western diplomacy towards Ukraine?
In meanwhile, Victoria Nuland, the US top diplomat for Europe and Eurasia, apologised a day later for her using crude language about the EU. The White House believes “a Russian hand” is behind the leak. The intercepted conversation allegedly dates from 26 January, when, following violent pro-European protests in Kiev, a government reshuffle was being considered in Ukraine whereby Arseny Yatsenyuk, the leader of the Batkivschchyna party of former Prime Minister Yulia Tymoshenko, was offered the job of prime minister and Vitaly Klitschko, a former international boxing champion, was offered the job of deputy prime minister. To that end, while suggesting that Klitschko should not be in the government but instead keep the unity of the opposition, Nuland preferred to see Yatsenyuk, who “is the guy”, to be prime minister.
Thereafter, Nuland also welcomed a possible arrival in Kiev of Robert Serry, a Dutch diplomat appointed by UN Secretary General Ban Ki-moon as his representative to deal with the Ukrainian crisis, stressing that it “would be great”. She then uttered the fatal statement saying that “to help glue this thing, and have the UN glue it, and you know – fuck the EU“. “Exactly”, the US Ambassador to Ukraine replied, adding that the US wanted somebody like Serry “to help midwife this” – which has been widely interpreted as a reference to the differences between US and EU policies on how to influence the political process in Ukraine. EU officials said they would not comment on a “leaked alleged” conversation. In the latest twist in this scandal, the German chancellor, Angela Merkel, has described Nuland’s remarks as “totally unacceptable”.