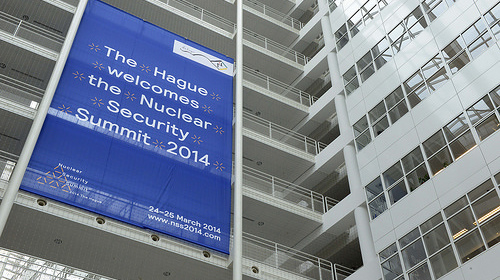 G7 is to negotiate the response to the Russian annexation of the Ukrainian peninsula of Crimea on the side-lines of the nuclear security summit in the Hague that starts today (March 24). Although the emergency meeting was announced already a week ago, Russian President Putin has managed to finalize the agreement annexing the peninsula on the Black Sea while Russian troops seized a Ukrainian airbase since then. So far, Western response to the biggest confrontation between the West and Moscow since the end of the Cold War has been in the form of sanctions. Sanctioning such as asset freezing or visa bans has been imposed on a number of closest business and political allies of Vladimir Putin.
In the Hague, the G7 is expected to discuss how to put more pressure on Moscow and what the potential costs could be. Western leaders are trying hard to find the balance between the protection of their economies and the punishment of President Putin’s annexation. According to Dutch PM, who is hosting US President Barack Obama and the leaders of Italy, France, Japan, Canada, Great Britain, and Germany in his mansion, the West should take it slow when handling Russia. US officials add that any further steps must be carefully analysed to avoid bans on entire industries or sectors, especially metal or oil that could potentially spread and have a negative impact on the global economy. British Foreign Secretary, William Hague, suggests instead that the West should focus on curbing arms sales to Russia.
It is expected that today’s talks will reveal whether Obama will pass his foreign policy test to convince his European partners to exert more pressure on Moscow. He has already threatened to impose US sanctions on key sectors of the Russian economy but Europe is very hesitant to follow as EU-Russian ties are far stronger than those of US-Russia. Limiting the space for manoeuvre for the EU is also the fact that the block buys about a third of its oil from Russia.