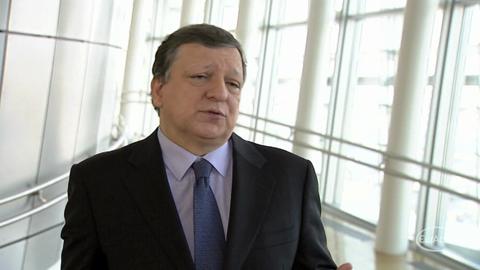 President of the European Commission, Jose Manuel Barroso, announced yesterday (April 9) the creation of a “support group” which will be in charge of backing up Ukraine and coordinating work with EU member countries, international financing institutions, donors, and all other stakeholders. Enlargement and neighborhood commissioner, Stefan Fuelle, has been asked to head the group and ensure its day-to-day running. The group will report to Mr Barroso and Catherine Ashton, EU’s foreign affairs chief.
The support group is to be based in Brussels and it will be managed by Peter Balas, who is currently serving as Deputy Director General in the Trade Directorate-General. The group is envisaged to consist of up to 30 full-time employees and experts sent by member states. Those will include also special advisors and contract agents. Commission President Barroso said that the decision to set up such a working group demonstrated the EU’s commitment and determination to help Ukraine in the long run. He did not fail to stress that the EU executive had already proposed a support package of at least 11 billion euros. The main task of the support group will be to ensure that the Ukrainian leadership has all the support they need to implement needed political and economic reforms to stabilize the country. The wider common goal of the EU member states is to “have a democratic, independent, and prosperous Ukraine”, Jose Manuel Barroso said.
The establishment of the group is unprecedented because under normal circumstances, EU institutions and the Commission itself deal with the association process and assistance to countries in the EU’s neighborhood. Therefore, it is also unclear whether the work of the support group will not duplicate the tasks of the Commission and related EU bodies. According to a press briefing, by the end of this year, the group and the Ukrainian authorities should identify and coordinate the technical assistance that they need to stabilize the economic situation. This will include pinpointing the most pending reforms that must be undertaken in order to preserve the economic health of the country and boost growth.