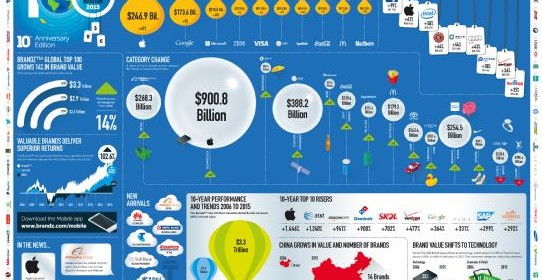 It has been a decade since the market research agency Millward Brown launched its annual ranking of the world’s most valuable brands. Since 2006, when the ranking was compiled for the first time, brand value has gone up by 126 percent to reach $3.3 trillion. This year alone, value increased 14 percent.

The world’s most valuable brand became Apple, returning to number one position after a one-year break with a 67 percent rise in brand value to $247 billion. To put Europe into the global perspective, the continent’s most successful brand is the German multinational software corporation SAP, valued at about 38.2 billion, which ranked no. 24 globally. If we take into account also UK brands, then the European winner is Vodafone with the value of 38.46 billion, which ranked no. 23.

Overall, continental Europe accounts for about 19 percent of the brands in the Top 100 but the brand value has only appreciated less than two percent on a year-to-year basis following a strong rise of 19 percent a year ago. In case of the UK, the brand value of the kingdom’s top 10 brands has in fact declined by 4 percent compared to a healthy rise of 14 percent in the previous year.

Europe’s lukewarm results in the competitive ranking are due to a number of factors. Most importantly, the real strength of the brands from continental Europe has always laid in luxury. Out of the continent’s top 10 brands, two are luxury brands and two are super-premium cars. However, the slowdown of the Chinese economy has negatively affected the whole category, of which the Chinese have continuously become very important customers. As a result, the sector has declined 6 percent in brand value on a year-to-year basis.

In the UK, the crux of the top 10 brands consists of global banks and oil companies. Whereas banks have still suffered following the financial crisis to restore the trust of customers, oil and gas brands have negatively reacted to the collapse of oil prices and the sanctions that prevented cooperation with Russian state-run companies on oil-drilling projects in the Atlantic.

The inability of Europe to push through more of its brands is moreover underscored by the continent’s limited accomplishments in producing successful technology companies. The success in this category is crucial as the entire brand value dynamics is shifting towards the high-tech industry. Technology increased 24 percent in brand value, leading all categories, as many brands have contributed to the industry brand value rise.

Facebook, for example, was the top riser with a year-on-year value increase of 99 percent thanks to the brand’s ability to successfully acquire new start-ups (such as Instagram) and to monetize its numerous users worldwide. The second most successful riser was Apple, and the third Intel, both tech brands, growing 67 and 58 percent respectively. As a result, the whole category accounts for about 44 percent of the Top 100 brands.

Given these three underlying forces behind the limping branding performance, Europe basically has two options how to strengthen its presence among the world’s top brands – a short-to-medium term one with predictably good outcomes and the long-term one with unclear outcomes.

First, the old continent should strengthen its luxury and automobile industries, which have traditionally been Europe’s major competitive advantage among the world’s top brands. This can be done in a passive way – by waiting for higher demand from China and for more robust economic performance at home – or in a more active way by targeting wealthy customers in other emerging markets such as Brazil or Russia (provided that sanctions allow it) or Indonesia. With some degree of patience and potential restructuring of target markets, this strategy could draw on the existing assets to make European brands count more again globally.

The second strategy is to focus more attention on entrepreneurs in the technology sector by providing generous funding options for new start-ups and companies in the sector. Although this strategy will certainly not improve Europe’s ranking in the 2016 Top 100, it will surely build the continent’s position not only in the branding charts but also in the demanding knowledge-based and data-driven economy.