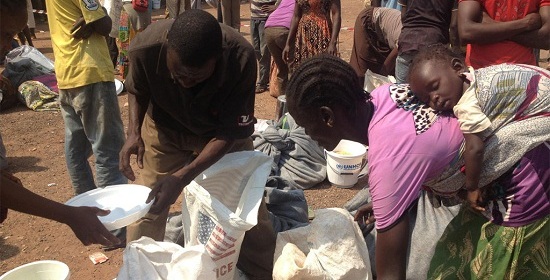 While the UN secretary-general Ban-Ki Moon announced earlier this month that only 20% of the $200 million of humanitarian aid pledged to Central Africa Republic (CAR) by the international community as part of a broader $500 million commitment had arrived, with half the country in direct need of humanitarian assistance, the international aid effort in the war-torn country is beset by strategic ambiguity, unclear objectives, funding shortfalls, incompetent administration, and failing political will. According to Father Aurelio Gazzera, a Carmelite priest, peace mediator and blogger working in the country, even this sum would probably not be enough, and without a participatory and demonstrable process involving the local population, it could be “more of a problem than a help.” Father Aurelio also stressed that the trickle of aid so far had been more less “a victory for money that never arrives where it should [because] civil society has never had any serious control over it, and they never see the color of that money.”
Since the previous humanitarian and development aid had allegedly ended up not with those people in dire needs of help but instead in the bank accounts of people such as government ministers, their families and friends. Therefore, aid monitoring was crucial to prevent this from happening again. Explaining that “the NGOs that receive this aid themselves don’t have a systematic approach,” he proposed that they stop buying things that are not necessary or else this money will only benefit village elites. Another clear priority was food distribution, reopening schools and peace mediation efforts. In December last year, the EU’s special representative for human rights intervened, and a contingent of French troops were sent to the town, thus managing to narrowly avert a massacre in Bozoum. However, a disarmament operation that was launched under Aurelio’s auspices was suspended after only four days, when the French troops withdrew.
Last but not the least, Father Aurelio also suggested that French Sangaris contingent in CAR were being deployed to protect French commercial interests. “The French troops don’t even try to hide it,” he said, adding that “In principle, they are there to protect the interests of the French companies and citizens.” The CAR possesses significant deposits of oil, uranium and other minerals, and France and China are believed to be planning an oil production in the country.