The TTIP’s Strategic Element: EU and US to Have a Big Say in Norm-Setting 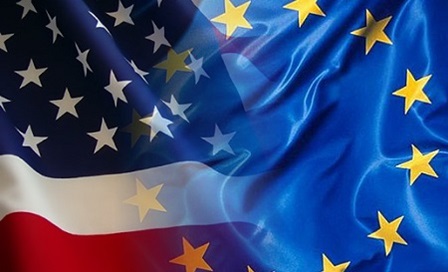 Interview with a High-Ranking Official of the Directorate General for Trade of the European Commission
EUBULLETIN has spoken to a senior official from Directorate General for Trade of the European Commission who wished to remain anonymous because of the sensitivity of some of the issues raised in this exclusive interview and also the nature of the comments. The frank discussion has touched upon a number of issues, mainly in relation to the ongoing Transatlantic Trade and Investment Partnership (TTIP) negotiations, such as the reasons why the negotiations are likely to be successful after a failure of similar negotiations in the 1990s, their timeframe and whether the deal could also be used to “contain” China.

EUBULLETIN: First of all, could you explain why the European Union and the United States should succeed in negotiating a TTIP Agreement this time if similar negotiations in the 1990s failed?
EC OFFICIAL: I can give you four reasons for that. The first one is, of course, the economic crisis. It is really the search for new and mainly external sources of growth and this has kind of changed the mindset both in the EU and US about the value of a transatlantic deal. It’s needed now and it kind of convinced many politicians to go for it. The second reason is that, of course, on the multilateral side, the WTO and the Doha round of negotiations do not really move and there is no perspective to proceed further, so both the EU and US saw a good opportunity to move forward with the trade liberalization agenda.

EUBULLETIN: What are then the other two reasons?
EC OFFICIAL: The third reason is that the world economy is changing in that we have emerging countries, such as China, Brazil, India, which are more and more influential also on the world scale. In this context, when looking at regulatory issues recently, if you put these two most important blocks together, the EU and US do not aim to dominate the others but we want to kind of search for solutions and do norm-setting and standard-setting. We also want to look for approaches that can be used by others which would be a better scenario rather than if everybody is doing different things and then the whole system is kind of hanging in the air. The fourth reason is that the issues that were very controversial in the past, like agriculture, are actually not issues any more. We have reformed our agricultural policy and it is now very competitive vis-à-vis the Americans, so there is no more the feeling that there is a total imbalance in the transatlantic relations. It is these four elements put together that have made it possible this time to kick off the negotiations.

EUBULLETIN: Let me pick one of the four reasons mentioned by you and it is the notion that if the TTIP can actually take off the ground, it can help mitigate the impact of the economic crisis and kick start the European economy. Can this idea be taken seriously, especially in light of the serious underlying structural problem facing European economy?
EC OFFICIAL: Of course, it can be taken seriously but you also need to look little bit at the timeframe. There will not be any immediate impact of the TTIP because the results will take some time to come into effect. So, if we negotiate on average for two years, we then need another two years to have the agreement to come into force as well. We need to be a little bit careful when it comes to the timeframe but the impact will be significant. We estimate that 0.5 percent of GDP growth will be generated additionally both on the European and American side which is already a significant contribution – it is world-changing in the sense of its impact on the economy. Many people call it “a shot in the arm” because it will be like an additional stimulus that is very, very useful. Also, psychologically, it can inject more dynamics into the economy, it can help the EU to improve its competitiveness or, in other words, it can help us with our own agenda within the EU. So, it has kind of two sides to it.

EUBULLETIN: You also referred to the norm-setting or standard-setting. If we look at a broader geopolitical dimension of the TTIP deal, is the TTIP designed also to prompt China and India and other rising economic powerhouses to behave according to certain norms jointly set by the EU and US? The not-so-obvious objective set by both Brussels and Washington appear to be also gaining a greater leverage particularly over China and other world’s most important economies.
EC OFFICIAL: The first is that trade cannot be used as a kind of containment of China – it is not a tool against anybody particular. That does not work in trade politics. But what does work is if you take together the two most important trading blocs – the EU and US – and create a critical mass, you have a big say when it comes to standard-setting and to enforcing regulations. It also applies to rules and if you look at the WTO rule book, which has not really further developed over many years, basically since the end of the Uruguay round, that could be a very important and interesting element in the TTIP negotiations. This is why we also look at areas that need further clarification, such as trade in energy, which are important not only for the transatlantic trade but which can then also be used at the broader, multilateral level later, or that we want to promote with third countries. So, that is kind of the strategic element in the TTIP, which will have a very important role to play in the future. But you have to look carefully because you do not have only the TTIP but also TTP (Trans-Pacific Partnership) negotiations which will seek to set their own standards.

EUBULLETIN: The recently concluded EU-Canada FTA negotiations lasted about two years. What are your expectations when it comes to the timeframe for the TTIP negotiations?
EC OFFICIAL: Our politicians have said that they want to conclude the TTIP negotiations as soon as possible. We have the European Commission which is now coming to an end – that is a good moment to see where we are. We will certainly have not fully concluded the negotiations by then but if we have a solid package by that time, it would be very, very useful. And then the political kind of guidance is: do this quick because lengthy negotiations are in the interest of nobody.