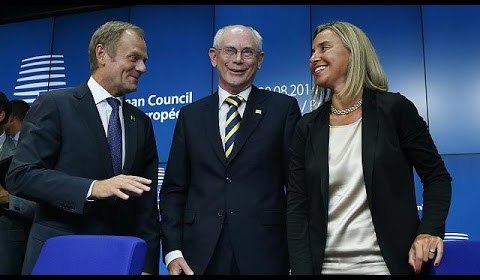 At the European Union summit on 30 August, EU leaders have appointed Poland’s Donald Tusk as European Council president and Italy’s Federica Mogherini as EU foreign policy chief. While Mr Tusk, Poland’s center-right prime minister, will chair EU summits, Ms Mogherini, a center-left politician and Italy’s foreign minister, will replace the UK’s Catherine Ashton. These two full-time appointments, which followed the appointment of Jean-Claude Juncker as the new European Commission President, mean that the EU’s three top jobs are now filled. The 57-year old Mr Tusk will serve for two-and-a-half years starting on 1 December. While his position could be extended by another two-and-a-half years, Ms Mogherini’s term, starting on 1 November, is five years.

Mr Van Rompuy, the current European Council president, called Mr Tusk “one of the veterans of the European Council”, which is the grouping of EU government leaders. Having been active in the Solidarity anti-communist movement back during his student years, Donald Tusk was afterwards the only Polish prime minister to have been re-elected since the fall of communism in Central and Eastern Europe in 1989. Mr Van Rompuy also noted that Mr Tusk would face three main challenges: the stagnating European economy, the Ukraine crisis and “Britain’s place in Europe”. On the appointment of the 41-year-old Ms Mogherini, he expressed his confidence that the Italian minister of foreign affairs “will prove a skillful and steadfast negotiator for Europe’s place in the world”.