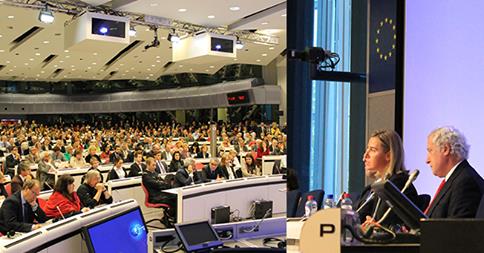 Examining the Discretion of the EEAS: What Power to Act in the EU-Moldova Association Agreement?
Hrant Kostanyan (The Centre for European Policy Studies)

The EU foreign policy architecture has been significantly modified since the enactment of the Lisbon Treaty in 2009. Among the changes, one of the most significant steps was the establishment of the European External Action Service (EEAS) as the basis for the EU’s common diplomacy. This article analyses the degree of autonomy the EEAS enjoys from the EU institutions and Member States.

Kostanyan makes use of the principal-agent model, in which the behaviour of one actor impacts the behaviour of another. In this case, the model is applied to the influence of the EU on the decision-making of the EEAS in the negotiation of the EU-Moldova Association Agreement, including the Deep and Comprehensive Free Trade Agreement (DCFTA). This agreement is especially relevant because Moldova was the first Eastern Partnership country to finalise the Association Agreement with the EU through the EEAS.

The study identifies ex ante and ex post control mechanisms employed by the Member States for the purpose of controlling the actions of the EEAS. Ex ante control includes authorising the negotiations and issuing the negotiations mandate, while ex post control is conducted through consultations and ratification. Through these mechanisms, Member States exerted significant influence on the negotiation process between the EEAS and Moldova. While the EEAS was responsible for negotiating the Association Agreement, the responsibility for the DCFTA was in the hands of the Commission’s DG Trade. This diversification created tensions between the EEAS and the Commission’s DG Trade on the issue of the start of the DCFTA talks. Unlike the EEAS, which considered Moldova politically important, DG Trade views Moldova as ‘insignificant’ in terms of trade and was reluctant to begin the negotiations.

The case of negotiations of the EU-Moldova Association Agreement illustrates that the post-Lisbon institutional modifications in the EU external action architecture did not alter the power dynamic in the EU significantly. The Member States continue to follow the precedents set by the negotiations of the Association Agreement with Ukraine, which took place before the EEAS was created. Although the Member States agreed to establish the EEAS, its position and standing in the EU foreign policy setup as a whole remains weak. The Member States remain the puppet-masters pulling the strings of the EEAS, which is expected to continue pushing the boundaries of its limited discretion.
(The study can be downloaded here: http://www.kluwerlawonline.com/abstract.php?area=Journals&id=EERR2014030)

A New Start for the EU‘s Area of Freedom, Security and Justice? Setting of Priorities for the New European Commission
Sergio Carrera and Elspeth Guild (The Center for European Policy Studies)

The new institutional shapes of the Juncker Commission portend important and somewhat surprising changes in the Justice and Home Affairs (JHA) portfolios. The First Vice-President Frans Timmermans will be the right hand of Junker and will act as a ‘watchdog’ upholding fundamental rights and the rule of law in all the Commission’s activities and those of EU Member States. The First Vice-President will also guide and coordinate the two other JHA Commissioners: Ve?ra Jourová, Commissioner for Justice, Consumers and Gender Equality, and Dimitris Avramopoulos, Commissioner for Migration and Home Affairs. This triangular relationship will oversee the rule of law and the EU Charter of Fundamental Rights in EU Member States.

Stronger EU supervision over the rule of law and the EU Charter is expected to meet resistance from Member States. These have often alluded to national sovereignty and subsidiarity as grounds for evading supranational oversight of their compliance with EU founding principles.

Against these frictions, a key priority should be for the First Vice-President to develop a new Commission policy and legislative program on policies related to the Area of Freedom, Security and Justice (AFSJ) for the coming years, which should be driven by better safeguarding of the rule of law (both primary and secondary) and go hand-to-hand with institutionalised collaboration with non-EU bodies, such as the United Nations or the Council of Europe. At the same time, in light of the Snowden leaks, the First Vice-President and the Justice Commissioner should ensure a strong EU data protection legal framework, focusing on clear rules on data processing for third countries, better enforcement and accessibility to information and legal remedies by data subjects and data protection of EU citizens in the U.S.

Finally, a partnership between the Migration Commissioner and the one for Employment, Social Affairs, Skills and Labour Mobility will be key to safeguarding free movement of EU citizens and building a genuine common labour immigration policy.
(The study can be downloaded here: http://www.ceps.eu/book/new-start-eu%E2%80%99s-area-freedom-security-and-justice-setting-priorities-new-european-commission)

Juncker and His College: The Unexpected Reformer?
Agata Gosty?ska (Centre for European Reform)

The new European Commission led by Jean-Claude Juncker differs from the previous administrations in its underlying structure. Juncker is the first president to organise the Commission’s work around ‘clusters’. Commissioners will now work in ‘project teams’ which reflect the major EU objectives: jobs and growth; reform of the economic and monetary union; the digital single market; an energy union; and more effective EU external relations. Vice presidents will serve as ‘team leaders’ and steer the work of the remaining commissioners.

However, a less presidential Commission may be more vulnerable to personal animosities and clashes of competences, especially if some vice presidents turn out to be less qualified than those they will be managing. Overly dominant personalities could also cause problems. Smaller and newer Member States have always opposed grouping commissioners in this way. They have feared that it would create second-class commissioners and that they would struggle to get a senior portfolio. But Juncker cleverly recruited six of his seven vice presidents from newer or smaller Member States. The large Member States were not left empty-handed either: the UK and France received the portfolios they asked for while Germany made sure that the key economic vice presidents were advocates of austerity.

Juncker’s critics, including the British government, viewed him as an old-fashioned federalist. It came as no surprise that such critique did not cease during the hearing process before the European Parliament. The Parliament itself is facing criticism from Member States for its increased role in the Spitzenkandidaten process. The record low turnout at May’s European elections did not enhance the Parliament’s authority either. However, the support of the Parliament and the Member States will be central to the effective functioning of the new Commission. At the same time, the current trend of strengthening the European Parliament is contrary to the wishes of the electorate, who are generally sceptical about further transfers of competences from the national to the EU level.

To turn the Commission into a vehicle for reforming the EU, Juncker must keep MEPs involved in the decision-making process without allowing them to dominate it, and find a way to reduce the distance between European citizens and the Commission that acts for their benefit. If Juncker wants to go down in history as the president who not only formed clusters but also made them work, he must show himself to be a good manager too.
(The study can be downloaded here: http://www.cer.org.uk/sites/default/files/Bulletin_98.pdf)