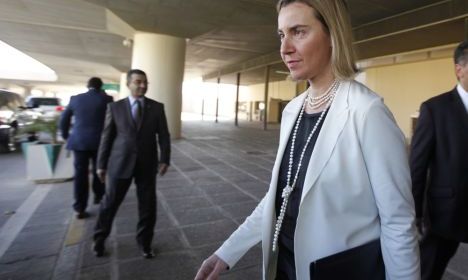 The EU’s foreign policy boss, Federica Mogherini, said that the EU28 should seek a new “debate” with Moscow trying to put a definite end to the West-Russia confrontation over Ukraine. Mrs Mogherini thinks that the current situation is very difficult for Russia and therefore it would be in the country’s interest to contribute to ending the crisis. “At the same time though, we all know that Russia plays an important role not only in Ukraine, but also in Syria, Iran, the Middle East, Libya. We have to open a direct debate with Moscow on our mutual relations and the role that Russia can play in other crises,” she said.

Moreover, Mrs Mogherini added that Ukraine and the United States were also eager to find a way out of this political crisis – Ukrainian authorities keep on asking how the conflict can be ended and the U.S. Secretary of State, John Kerry, has expressed the same wish. “Everyone wants to get out of the logic of confrontation, of wall against wall,” she emphasized.

The chief of European diplomacy is going to chair a strategic discussion on Russia attended by EU foreign ministers in mid-January. The main point of the agenda will be the decision whether to extend anti-Kremlin sanctions for another year. EU leaders already held talks on Russia earlier in December but German Chancellor, Angela Merkel, made it clear that sanctions can only be removed if Russia gives up the annexed Crimea. In the meantime, Russia, Ukraine, and the Russia-controlled rebels held talks in Minsk last week during which they agreed to a prisoner exchange. The parties, however, failed to negotiate a more comprehensive deal.