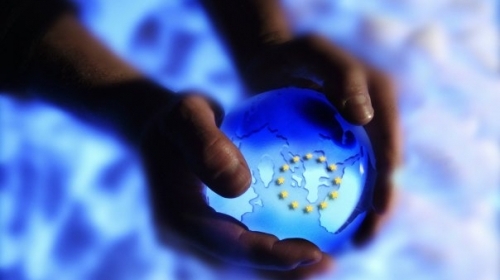 In his Brussels-based exhibition called ‘Life in the Former EU: Final Years of the Long Peace,’ a Belgian theater director has identified 2018 as the year when the European Union will collapse. Thomas Bellinck whose exhibition features a doomsday timeline presenting the bloc’s six-decade run as a peaceful interregnum before the continent’s relapse into nationalism and gradual decay, asserts that “[While] we need national politicians who are either prepared to defend the project and redo it or admit that they don’t want to do it, … now we have something in-between.”
Back in the 1950s, the Union’s founders envisioned an “ever closer union” which, however, now seems to be inching in the opposite direction – the euro has been plagued by the four-year debt crisis, the UK is threatening to secede, extremist voices in Greece are on the rise. Prolonged economic recession coupled with a deepening political quagmire and mounting debt load have all contributed to Europe’s lagging further behind China and other emerging powers. The figures are telling: IMF reports that the euro zone’s share of global gross domestic product has fallen to 13.1 percent from 18.3 percent when the currency was forged in 1999.
Romano Prodi, a former Italian prime minister and European Commission president, tends to be more optimistic: “The situation is quite delicate, but the scenario of the disappearance or crumbling of Europe is not real. For the short and medium term, to become more and more irrelevant — this is the real risk.” Yet, according to an U.S. intelligence analysis ‘Global Trends’ released last year, ‘gradual falling into irrelevance’ is only one of alternative futures laying ahead of Europe, the others being ‘collapse’, ‘slow decline’, or ‘renaissance’. While finding a „low” likelyhood of the Union’s outright collapse that would lead to the fragmentation of the European single market and the breakdown of civic order, the U.S. intelligence report refers to the current European situation as „slow decline”.
However, some European leaders are quick to predict the most dire scenario – the Union’s demise. In France where globalization’s discontents are permeating the political discourse, National Front leader, Marine Le Pen, argued recently that the EU will “crumble like the Soviet Union.” In an interview published on October 15 by Agence France-Presse, RFI and Liberation, Le Pen said that “We are the 5 percent of the world’s people with no control over our economy or currency, or over the people circulating on our territory.” Those who think that this opinion is coming from the extreme fringes of the French political spectrum are excused for being wrong. In reality, Le Pen’s ‘economic patriotism’ – advocating ditching the euro and casting off „dictates of economic policy from Brussels and Berlin” – has catapulted her into being currently the third most-popular politician in France.